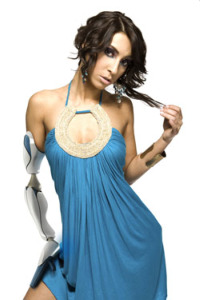 There is an arc of progress with human technologies: first comes functionality, then gradual acceptance, and then the aesthetic overhaul. The transition from practicality to personality has always interested me, because it hinges on that point of acceptance, be it grudging or enthusiastic; only then do notions of art start to appear and entwine themselves with functional objects.

Some objects achieve that point of acceptance more quickly than others; these are usually the objects of power, objects that make someone more than human – swords and cars, for example. Slower to achieve acceptance and freedom from stigma are those objects designed to raise the disadvantaged to the same status as everyone else.

We appear to be on that cusp of acceptance with human prosthetics. Granted, there have probably been carved crutches, peg-legs and walking sticks for millennia, but they were only ever crude stand-ins (if you’ll excuse the pun) for a damaged or missing limb. But they represented a refusal to be stigmatised, a defiant embracing of the user’s condition – “This is me; this is my replacement limb. Deal with it.”

Now we can build prosthetic legs that are in some respects superior to the originals, and it surely won’t be long before artificial arms that can replicate (or exceed) the essential functions of their biological equivalents become available to the widening sphere of those who can afford them – and that defiance, that rejection of stigma, will become more prevalent. It’s a stage of great interest to transhumanist thinkers, naturally, but it’s also attracting the eyes of artists and designers who’ve noticed a new human space to colonise with the communication of ideas.

There’s a gallery of cybernetic design concepts – like Hans Huseklepp’s Immaculate Arm, pictured top right – and photo-portraiture over at New Scientist at the moment which will get you thinking about this sort of stuff (it’s what inspired the preceding paragraphs of waffle from me, at any rate), but consider it only a starting point. Sit back for five minutes and think about the ways we already customise the human body for aesthetic effect; then imagine what we’ll start doing when prosthetics are affordable and effective enough to become ubiquitous. It’s closer than you think. [image copyright Hans Huseklepp, reproduced here under Fair Use terms; please contact for take-down if required]

Here’s your starter for ten: when will we first hear of people choosing to replace undamaged natural limbs with prosthetics, be it for practical or artistic reasons? How will the general public react to that? How would you feel if your teenaged son came home with a cybernetic hand in place of the perfectly functional one he had before?