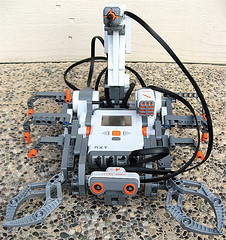 That’s the question SlashDot posed as they relinked to a research study at Washington University’s the University of Washington Computer Science & Engineering department entitled “A Spotlight on Security and Privacy Risks with Future Household Robots: Attacks and Lessons”, which reports on the potential for currently available household robots being hacked and exploited by malicious (or simply pranksome) third parties. [image by jurvetson]

Q. What robots did you study?

The RoboSapien V2, the Rovio, and the Spykee. Our versions were purchased in or before October 2008.

Q. Are you saying that I shouldn’t purchase one of these robots?

No. We are saying that there are security vulnerabilities relating to the specific versions of the robots that we studied. Any purchase decision will necessarily be made based on many factors, only one of which might be the vulnerabilities we identified. You may conclude that despite the vulnerabilities, one of these robots is right for you. In addition, we studied only three specific versions of the RoboSapien V2, the Rovio, and the Spykee. We have no reasons to believe that comparable robots from these or other manufacturers are more or less secure than the ones we studied.

Obviously the idea of your RoboSapien running amok in your absence is an admittedly minor worry – you’re unlikely to suffer more than chipped skirting boards or table legs. But looking just a little further ahead, the Washington crew are making a lot of sense; household bots are likely to become more prevalent pretty quickly, in direct proportion with their ability to do genuinely useful (or destructive) stuff. Security is rarely a high concern in consumer electronics, and the relentless ubiquity of spam is clear proof that you can’t realistically expect the average user to take adequate precautions either… so what seems like a bit of a gag now will probably be headline stories within a decade.

And it’s not just the household where the robot population is increasing – the damned things are cropping up everywhere, in all sorts of shapes and sizes and with all sorts of capabilities. Take, for example, the swarm of robotic bees that Harvard researchers are developing:

Harvard researchers recently got a $10 million grant to create a colony of flying robotic bees, or RoboBees to among other things, spur innovation in ultra-low-power computing and electronic “smart” sensors; and refine coordination algorithms to manage multiple, independent machines.

So, how dangerous could a hacked robot really be? Well, do I have any volunteers to enter that swarm of angry and compromised robotic bees?

2 thoughts on “How dangerous could a hacked robot really be?”