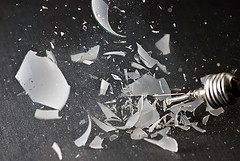 If you’d asked me to make a list of people I thought would be opposed to political transparency and “open government”, Lawrence Lessig would not have appeared in my top hundred. But here he is, writing at The New Republic, saying that while the intentions of government transparency movements are good, there may be serious negative repercussions [image by Kyle May]:

How could anyone be against transparency? Its virtues and its utilities seem so crushingly obvious. But I have increasingly come to worry that there is an error at the core of this unquestioned goodness. We are not thinking critically enough about where and when transparency works, and where and when it may lead to confusion, or to worse. And I fear that the inevitable success of this movement–if pursued alone, without any sensitivity to the full complexity of the idea of perfect openness–will inspire not reform, but disgust. The “naked transparency movement,” as I will call it here, is not going to inspire change. It will simply push any faith in our political system over the cliff.

(I don’t know that I have much faith left in mine to lose, frankly – by the time you Statesiders read this post, you’ll probably also be hearing a whole lot about the Trafigura/Guardian gagging order. I’ll not bother linking it; just look at the trending topics on Twitter. And as a commenter at MetaFilter pointed out: “Well, we’ve tried invisible corruption and back-room dealing for so long, why dismiss transparency without even really trying it?” But anyway, back to Lessig…)

There is a type of transparency project that should raise more questions than it has–in particular, projects that are intended to reveal potentially improper influence, or outright corruption. Projects such as the one that the health care bill would launch–building a massive database of doctors who got money from private interests; or projects such as the ones (these are the really sexy innovations for the movement) to make it trivially easy to track every possible source of influence on a member of Congress, mapped against every single vote that the member has made. These projects assume that they are seeking an obvious good. No doubt they will have a profound effect. But will the effect of these projects–at least on their own, unqualified or unrestrained by other considerations–really be for the good? Do we really want the world that they righteously envisage?

The point is salience, and the assumptions of our political culture. At this time the judgment that Washington is all about money is so wide and so deep that among all the possible reasons to explain something puzzling, money is the first, and most likely the last, explanation that will be given. It sets the default against which anything different must fight. And this default, this unexamined assumption of causality, will only be reinforced by the naked transparency movement and its correlations. What we believe will be confirmed, again and again.

But will not this supposed salience of money–the faithful disciple of Brandeis asks–simply inspire more debate about whether in fact money buys results in Congress? Won’t more people enter to negate the default? Like a rash of flat-earth defenders, won’t the attention cause round-earth truth to spread? Again, we must keep our intuitions guided by the concrete. No doubt false claims will sometimes inspire more truth. But what about when the claims are neither true nor false? Or worse, when the claims actually require more than the 140 characters in a tweet?

If I’ve understood his position correctly, Lessig isn’t saying that transparency is a bad thing as such; he’s saying that the current political system cannot support it, or change quickly enough to do so without collapsing under the weight of scandal and scrutiny. He may have a point… but I find myself wondering if that’s not just one of a couple of inevitable outcomes, the other being a sort of global totalitarian lockdown. If so, I know which I’d choose.

Personally, I think enforcing transparency is a bigger issue than transparency itself. If one powerful force (party, country, company) goes transparent, eventually the “market” will force others to follow suit – transparency builds trust, and that’s something that’s hard to compete with on any terms other than its own. We need to encourage ground-up transparency rather than having it rolled out from the top downwards; if the regulation of power is left to those who already hold it, you’re going to run into snags of one sort or another pretty fast.

On a somewhat lighter note, though, I think a new sub-genre of fiction has just been born – who will be the first to write a near-future transparent-government-collapse technothriller? Whole lotta folk living in cabins with guns who’ll buy a copy of that, I’m thinking…

4 thoughts on “The transparency trap: why open government might be worse than closed”