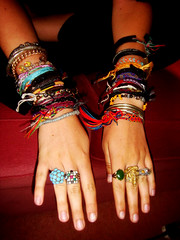 Boy, those stock market trader guys sure can get the rest of us into a mess with their crazy high-jinks. But it’s not entirely their fault, you know – they just get a bit carried away in the heat of the moment. C’mon, we’ve all been there – emotions run high, you have to make a snap decision, and sometimes you get it wrong. Granted, for most of us there’s little chance of shafting the entire planet in the process…

But wouldn’t it be good if we could keep those traders calm? If we could lay a metaphorical cool hand of reason on their shoulders every once in a while and say “hey, maybe you’re thinking with your heart (or your dick) rather than your head”? Electronics giant Philips and financial behemoth ABN Ambro seem to think it’s a great idea, and have hence teamed up to develop a conceptual device called the EmoBracelet, which should achieve the same effect:

The gadget […]measures electrical signals from users’ skin to assess their emotional state. The technology is similar to a lie detector recognising the nervousness behind a fib.

The announcement by the two companies said online traders had nearly double the number of deals as those who traded through a broker and that online traders earned lower returns because of poor decisions.

”Driven by fear, they may sell too hastily when share prices drop. Driven by greed, they may be overenthusiastic,” the announcement said.

The EmoBracelet and another device, an EmoBowl, use electrical displays to show a person’s emotional intensity. The two items were designed to warn traders to step back and take a breather by alerting them to their heightened emotional state.

As a wearer’s emotions grow more intense, lights flicker faster on the bracelet and the colours inside the bowl change from a soft yellow to orange to a deep cautionary red.

Nice idea, guys, but I have to say that I’m not sure the EmoBracelet is going to prevent traders doing dumb things. After all, most of the folk I’ve worked with who were prone to agitation or emotional overinvolvement with their work would react rather badly to having their “heightened mental state” pointed out… and some of them would probably carry on pushing the envelope just to prove how on top of things they really were (in their minds, at least).

A version of the EmoBracelet that injected the trader with a hugely powerful soporific at the pertinent moment might be a little more useful, however… [story via Technovelgy; image by McWilliams Graphics]