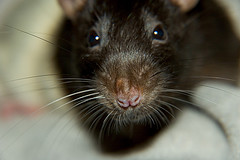 Steve Jobs and company may have radically re-engineered the mouse, but a team of researchers from the States and China have been busy re-engineering the rat, culminating in the quaintly-named Hobbie-J, a rodent who owes her preternatural smarts to the over-expression of a particular gene associated with brain-cell communication speed. [image by stark23x]

Scientists found that Hobbie-J consistently outperformed the normal Long Evans rat even in more complex situations that require association, such as working their way through a water maze after most of the designated directional cues and the landing point were removed. “It’s like taking Michael Jordan and making him a super Michael Jordan,” Deheng Wang, MCG graduate student and the paper’s first author, says of the large black and white rats already recognized for their superior intellect.

That’s one of the best quotes I’ve read in a science article in ages; it’s like something Don King would say. And if you’re now worrying about hordes of intellectual rodents escaping their cages and taking over the world, relax – Hobbie-J isn’t going to be inventing a death-ray any time soon.

… even a super rat has its limits. For example with one test, the rats had to learn to alternate between right and left paths to get a chocolate reward. Both did well when they only had to wait a minute to repeat the task, after three minutes only Hobbie-J could remember and after five minutes, they both forgot. “We can never turn it into a mathematician. They are rats, after all,” Dr. Tsien says, noting that when it comes to truly complex thinking and memory, the size of the brain really does matter.

More interestingly, though, this sort of meddling is a proof-of-concept. What might similar tweaking achieve in animals whose cognitive ability already approaches that of our own? Perhaps a radical group of animal rights activists might boost the brain-power of some primate tribes in order to justify parity in their treatment under law. In other words, maybe animal uplift isn’t as ridiculous an idea as it might initially appear…