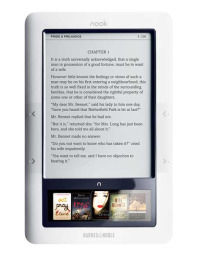 I don’t know for sure, but it’s certainly ticking a lot of my requirement boxes by comparison to the alternatives. Barnes & Noble have dropped a minor bombshell in the form of the Nook ebook reader, which is powered by Google’s Android operating system and open to a whole lot of everyday file formats that the competition don’t touch. Here are some highlights from the Ars Technica rundown:

In contrast to the Kindle’s physical keyboard (and Sony’s on-screen one), the Nook uses a color touchscreen for most of the navigation (it’s listed as a 3.5″ TFT-LCD); it’s laid out as a wide band immediately below the E-Ink screen. Various demos show that this can be used to access a series of settings through hierarchial menus, and it will display book covers, either from the B&N store or in your library, in full color. It’s not clear at this point whether it can also display an on-screen keyboard for note-taking and other text entry.

In other ways, the Nook is a bit of a throwback to the first version of the Kindle. It’s a bit thicker and heavier, but that enables B&N to include a removable battery and an SD card slot for additional storage—2GB is built in. It also comes with free access to a 3G cellular network (this one from AT&T), but one-ups Amazon by including WiFi, which will allow some of its features to operate during foreign travel. It can be connected to a computer or charged via a mini-USB port, and the device also has a speaker and headphone jack.

All of these features may explain why the battery is removable. B&N estimates that the device will run for about 10 days on a single charge if the various wireless options are shut down, but heavy use of the optional features may drain it in as little as two days.

So, the sort of thing you could take abroad and still access new content with. And who knows what sort of capabilities the hacker crowd will discover once they learn to root the OS and add their own applications? Some sort of basic web browser attached to the wi-fi connection doesn’t seem implausible. But the best is yet to come:

Some of these hardware choices may make it a compelling device, but the real differentiator is probably in the software. B&N turned to Google’s Android operating system to power the Nook, which may be why it supports so many file formats, including PDF, EPUB, eReader, MP3, and PNG, JPG, and GIF image formats.

Like the Kindle, the software will synchronize content among a variety of devices, including PCs and Macs, as well as Blackberries, iPhones, and iPod touches. But it also allows users to lend their purchased items to friends with linked accounts. So, for example, you can choose a book and send it to a friend via the touchscreen interface. Once sent, your friend has 14 days to read it (presumably, the work is inaccessible to you during that period).

Finally, someone has remembered that people like to lend books! I rather suspect there’ll be a lot of fiddly legal loopholes and DRM involved, but it’s a step in the right direction.

The snag-point for me (besides the fact that it doesn’t look like there’ll be a UK version particularly soon) is being tied to a specific retailer’s store, but that’s ameliorated a great deal by the ability to read PDFs and other standard formats – it means there are literally thousands of books and stories that you can read for free on the Nook. All you have to do is go fetch them from somewhere and load them on… and a rooted device with the aforementioned basic web capabilities could make that a simple procedure, too.

But the price-point and capabilities are (hopefully) a harbinger of things to come; I think we’re getting nearer to the tipping point that mp3 players went through a while back, when there’ll be a sudden wave of generic hardware that doesn’t tie the user to a particular content provider. Ideally you’d have the option to link to all the major ebook vendors as well as the ability to download free material from the web, and that’s plainly well within the bounds of technological possibility (although the vendors will resist calls to surrender their walled garden exclusivity, no doubt). Will the ebook market grow quickly enough to provide that pressure? I guess we’ll have to wait and see, but the protestations of those who say that ebooks will fail because they’ve always failed before are starting to sound a little shaky to me. [image ganked from The Guardian; contact for immediate takedown if required]

So, what do you think? Would you be interested in a B&N Nook? If not, why not? What features or capabilities is it missing?

4 thoughts on “The B&N Nook – is it the ebook reader we’ve been waiting for?”