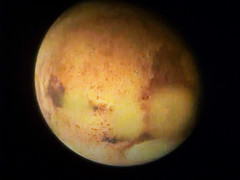 Even someone who struggles as badly with their personal finances as myself would be hard pressed not to realise that NASA finds it hard to balance its lofty ambitions with the number of greenbacks in the jar on the mantelpiece. Now the Agency’s recently-appointed committee is saying the same thing in plain language: the money for a Mars mission just isn’t there, but more realistic goals like jaunts to asteroids and the Lagrange points can and should be followed up.[image by jasonb42882]

Now, I’d like to see manned Mars missions happen in my lifetime (as I’ve made plain here a number of times), but I’d rather that the planet’s biggest player in the space game got the maximum bang for its diminishing buck. As things stand now, everyone else follows where NASA leads, and while that won’t be the case for ever (or even for long, if you want to be a pessimistic realist about it), and I’d rather see them pushing the envelope steadily than trying to blast heroically through it. Watch the private space companies, as Brenda suggested the other day; those incremental baby steps soon start adding up.

And after all, there’s plenty of interesting stuff to do that doesn’t require a jag all the way to Mars. As the committee’s report points out, asteroids are easier to get to, and there’s still plenty they can teach us. Plus there are resources to be had; maybe NASA could balance the books a bit by slinging some or all of an asteroid back to Earth? A big lump of ice and minerals in close proximity to the home planet is the sort of thing a lot of the smaller fry would pay for a piece of, and it would be a handy thing to have in inventory for your own future works at the top of the gravity well (and beyond). And then there’s the the Lagrange points… depending on your focus, you could either do some good science out there, or get all Ben Bova on our asses with hotels and heavy industry.

Thinking pragmatically, the committee are right: Mars can wait, not just for NASA but for everyone. We should go, yeah, but we should go when we’re ready and able. As this rather charming infographic at BoingBoing shows, our success rate has been improving ever since we started trying to reach the Red Planet… but by trying to punch above our current weight, maybe we’re missing out on flooring some more manageable targets closer to home.