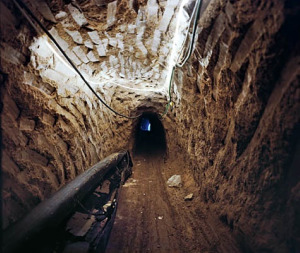 Here’s some fresh food for thought via the perpetually reliable BLDGBLOG, in the form of a report (and photoessay) on the black economy of the Gaza strip, which hinges on the many tunnels that run beneath the border:

If Gaza runs off a tunnel economy, Rafah is its tunnel town. In Najma Square, in the center of Rafah, the fruits of tunnel labor meet their first customers. Encircling the square are tables of TV sets, fans, blenders and generators; stalls packed with refrigerators, washing machines and ovens — and this is just the electrical side of town. Moving west toward the border, you see more goods: boxes of cigarettes, giant sacks of potato chips and sacks of cement. Then you pass the warehouses that sell the tools used to physically shape the tunnel industry: shovels, rope, pulleys and electrical cords, plus pickaxes, hammers, nuts, bolts and screws in all sizes. The industry of making the tunnels is a booming business on its own.

It’s not an especially science fictional story, at least at first glance – what could be less futuristic than hand-dug tunnels in the desert soil, and their freight of minor luxuries? [Image by Richard Mosse, from Time magazine; all rights reserved]

But think again: the tunnels are a result of a community placed under extreme economic isolation, a combination of the entrepreneurial spirit and the drive for survival. The risks, as documented in the article, are great – the tunnels are not only illegal, but dangerous – but the presence of the border makes them essential, inevitable. Ingenuity and desperation can defeat a physical border; history makes that very plain.

But this is all taking place in a world where goods are physically instantiated before being transported to the end user. Flash forward a decade or two (maybe less) to a world where fabrication and rapid prototyping technologies are as widespread as computers are now. How will nation-states contain the flow of goods across borders when the goods are no longer physical, when complete designs for contraband items can be emailed into a restricted zone, encoded by steganography into some innocuous image macro or spam leaflet?

Networks nullify geography… OK, so you won’t be able to fabricate food, but you’ll be able to fabricate weapons to attack those who prevent food from getting to you, and once you’re hungry enough that’ll seem like the best idea you ever had. End result? Physical blockades of other nation-states will become self-defeating; the very technologies that have enabled your initial superiority will oblige you to concede certain freedoms to those you have suppressed, because it will be easier and safer (and, hopefully, more politically acceptable) than the alternative. You can’t pull the ladder of technology up behind you as you climb.

One thought on “Underground economics”