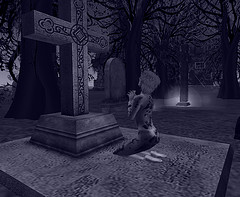 This week’s big social network story is Facebook’s announcement that they now allow the user profiles of people who’ve died to be “memorialised” – frozen in perpetuity (one presumes) so that you can still visit them, like some digital tombstone or memorial bench. [image by moggs oceanlane]

As that blog post makes clear, Facebook are obviously reacting to a genuine human need, though it would be easy (if highly cynical) to suggest that they’d like a slice of the growing traffic for online memorial sites, as mentioned earlier this month. But questions remain – who will maintain these profiles, and for how long? Will they drop out of the system when their last friend connection is severed (assuming, of course, that any social network platform lasts long enough for that to happen)? Will those memorial profiles be any more or less transferrable to new networks than those of the living? Will the memorials still have adverts surrounding them, like a normal Facebook page, and is that a morally acceptable price for their maintenance?

The biggest question is obviously “how much checking will Facebook do to ensure that the person really is dead?” Internet “pseuicides” aren’t a new phenomenon, and it’s not clear whether the Facebook crew have a procedure in mind to prevent a group of friends faking a death, be it in collusion with the owner of the profile in question or otherwise. Given how easy it is to hack many people’s public email accounts (poor password choices, easily reverse-engineered ‘secret questions’, etc.), unless they demand some sort of legal confirmation from the state that the owner has indeed passed away it could be a relatively simple scam to declare a living person to be deceased. Indeed, that might even become a popular black economy service, alongside fake IDs and new identities.