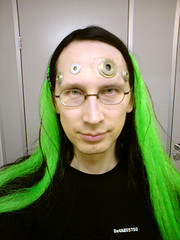 Here’s an update for those of you who, like me, eagerly await the availability of your cyberpunk implant suite – experiments with using silk as a substrate for miniaturised electronic circuits show that they can integrate with animal body tissue without any adverse effects or biological rejection. [via NextBigFuture; image by Automatomato] Which means we can not only make better neural interfaces, but aesthetic gadgets like LED ‘tattoos’ to live under our skin:

To make the devices, silicon transistors about one millimeter long and 250 nanometers thick are collected on a stamp and then transferred to the surface of a thin film of silk. The silk holds each device in place, even after the array is implanted in an animal and wetted with saline, causing it to conform to the tissue surface. In a paper published in the journal Applied Physics Letters, the researchers report that these devices can be implanted in animals with no adverse effects. And the performance of the transistors on silk inside the body doesn’t suffer.

The biocompatibility of silicon is not as well established as that of silk, though all studies so far have shown the material to be safe. It seems to depend on the size and shape of the silicon pieces, so the group is working to minimize them. These devices also require electrical connections of gold and titanium, which are biocompatible but not biodegradable. Rogers is developing biodegradable electrical contacts so that all that would remain is the silicon.

The group is currently designing electrodes built on silk as interfaces for the nervous system. Electrodes built on silk could, Litt says, integrate much better with biological tissues than existing electrodes, which either pierce the tissue or sit on top of it. The electrodes might be wrapped around individual peripheral nerves to help control prostheses. Arrays of silk electrodes for applications such as deep-brain stimulation, which is used to control Parkinson’s symptoms, could conform to the brain’s crevices to reach otherwise inaccessible regions. “It would be nice to see the sophistication of devices start to catch up with the sophistication of our basic science, and this technology could really close that gap,” says Litt.

In other words, we’ve pretty much got the hardware capability to interface machines and computers with our brains and nervous systems, what with these silk circuits for basic actuators and the previously-mentioned optogenetic technologies for deep duplex information channels. Now all we need to do is reverse-engineer the nervous system’s protocols and write a programming manual for the human brain… simple, right?