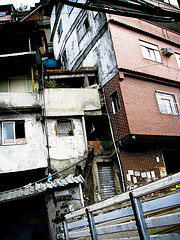 Via Chairman Bruce, here’s some required reading for anyone writing near-future fiction that involves a favela as a setting… and given the way the world is becoming urbanised, a near-future story that doesn’t feature a favela can probably be considered to have something missing from it! It’s an article from 2008 in the Harvard Design Magazine, titled “Resisting Representation: the Informal Geographies of Rio de Janiero“, and it’s well worth the half hour or so it’ll take you to read it. Here’s a brief sample:

Rio de Janeiro is a city with a population of just over six million in its central urban areas, of which, according to officials, an estimated 20% are residents of favelas. These favelas vary enormously in size and character. These urban islands, like those of the earth’s waters, have formed according to several genealogies and geologies. Some, like continental islands, share a history and underlying structure with those around them, as if they have collectively broken off from a land mass. Others, like volcanic islands, seem to develop independently and suddenly from more isolated and turbulent forces. Still other favelas, like coral atolls, build slowly on an underlying urban structure. These metaphors show how favelas differ in their relationship to their surroundings—their seemingly insular status belies the fact that submerged structures tie them to the city.

Read on for more details about the utilities and transport infrastructures that enable favelas to exist, and the socioeconomic pressures that ensure they keep growing and multiplying in spite of all attempts to curb the expansion. [image by anthony_goto]

And as an added bonus, here’s a game-changing technology to drop into your fictional favela – Contraptor is the name of both an organisation and the open-source rapid prototyping system it has designed and built. Like a more sturdy and diverse answer to the RepRap, in other words – an affordable way to put the means of production into the hands of pretty much anyone with a few hundred dollars and an internet connection [via Fabbaloo]. You’ve got your setting, you’ve got your novum – and you’ve got a thousand stories waiting to be written.

One thought on “Required reading: mapping the favela”