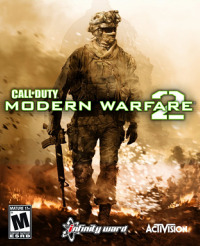 Serendipity, yet again… Jonathan’s latest Blasphemous Geometries column on the moral dimension of modern computer game mechanics arrived in my inbox last weekend, and hence (unless he has contacts in the industry of which I am unaware), he’d have had no idea that this week would see a firestorm of controversy over a certain level in the newly released Modern Warfare 2 game. The level in question requires your character to inflitrate a terrorist group and, so as to maintain your cover story, participate in the shooting of innocent civilians; MetaFilter has a good round up of reviews and opinion pieces on the game, and the comment thread is full of interesting responses from both sides of the fence.

The predominant question seems to be whether this sort of gameplay can be considered “right” – yet another iteration of the “do computer games cause/encourage violence” debate, which itself rolled on from a similar public angst around the proliferation of graphic horror movies in the late eighties. There have been numerous surveys and research projects designed to accumulate evidence around this idea, but to the best of my knowledge there’s been nothing truly conclusive either way – though my instinct as a formerly rabid gamer (I don’t have the spare time to play often any more) suggests to me that computer games do no more to encourage violence than Saturday morning kid’s cartoons.

Indeed, it occurs to me that the rightness or wrongness of the “No Russian” level of Modern Warfare 2 – the hand-wringing over whether such a thing should be allowed to go on sale – is a false dilemma; the more pertinent question is that of what it says about the world in which it exists. Plenty of commentators are branding it tasteless, and I have a certain sympathy with that viewpoint – but there’s a lot of things out there that I consider tasteless, and I don’t believe that things should be made to go away just because I don’t approve of them. Censorship should start (and end) with your own finger on the off button, IMHO.

But thinking about the plot of the level (and of Modern Warfare 2 as a whole, from what I’ve been able to glean from reading reviews and opinion pieces about it) from a writer’s (and reader’s) point of view, it actually makes a lot of sense in the context of modern counter-terrorist narratives, with the result that it puts the player into a morally questionable situation that reflects the world beyond the game… though exactly how accurate that reflection may be is open to debate. Perhaps there is a valid argument to say that games like this might put ideas in people’s heads, and end up glorifying what they’re supposed to demonise (if there’s any real difference between those two words beyond one’s personal moral code), but I suspect that the sort of person who’d be encouraged to acts of random violence against innocent civilians by media of any sort is already psychologically predisposed to such an action. And if computer games are a nefarious way of seducing the impressionable with the power-trip of consequence-free violence, what then should we think about the United States Army, which has used the taxpayer-funded computer wargame America’s Army as a recruiting tool since 2002? Is it OK to encourage violence so long as it’s against the right targets?

[Related bonus item -did you see the article at Wired about the Libertarian-penned “2011: Obama’s Coup Fails” web-based strategy game? If nothing else, that demonstrates amply that when people encode a political or ideological subtext into a game to the detriment of plausibility, the end results are invariably laughable. And that’s not a partisan statement, either; I’m pretty sure that even were the boot on the other political foot I’d be equally amused by (and disgusted at) the incredible crudity of the sermonising, which reeks of the same childish mudslinging that’s currently packing UK news venues as the incumbent Labour government enters its final earth-bound tailspin and the vultures of opportunism don their bibs.

But then last night I watched an excellent documentary on the history of the Berlin Wall, and found myself laughing at the crudity of the archive propaganda from both sides of the Iron Curtain… before I remembered that, to be effective, propaganda only needs to be slightly more sophisticated than the average media literacy of its target audience.]

2 thoughts on “But is it art? Modern Warfare 2, computer games and morality”