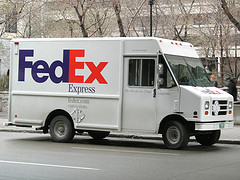 Those of you in the States may not be aware (or even care) that the staff of Royal Mail were recently engaged in wildcat strikes as a protest against the machinations of their management. Much as a lot of us have sympathies with their plight, it’s hard not to see them supplying the nails for the business’s coffin lid in the process; for example, in my guise as a music reviewer, the last two months have seen a sudden massed move by music PR outfits from mailing CDs to using file transfer services. It’s a sad story, really, the sort of thing I dare say someone will make a movie out of; by using the only method available to him to protect his job, the humble British postman is unwittingly hastening his own demise*.

But don’t feel too comfy over there, Statesiders, because Fed-Ex won’t last much longer in the grand scale of things. Tim Maly of Quiet Babylon points out that as old-school letters are trumped by email, Fed-Ex’s business shrinks down to authenticated documents and object transfers. The former won’t last much longer:

For whatever reason, the business/legal world insists that it needs a copy of a sheet of paper with ink from a pen that I actually touched.

So it gets sent by FedEx and the guy shows up at your door with the package and to prove it was received, you sign for it. On a touch pad. Electronically. I don’t think that the signed documents portion of FedEx’s business is long for this world.

That’ll leave Fed-Ex with what you might call “molecule moving” as its last major specialisation. And while the internet can’t dissolve that as quickly as data and authenticity, the writing is already on the wall, albeit faintly:

At some point, rapid prototyping and 3d printing becomes a mature technology. It leaves the design studios and then the factories and ends up, if not people’s houses, then at least as commonly distributed as print shops or 24 photo developers (which are themselves getting to be less and less common). Just-in-time fabbing.

So many of the things that we ship are mass-produced and interchangeable. Take a look around you and consider all the stuff you might move, were you planning to move. How much of it is stuff where an exact copy would be fine? How much of it is stuff where a factory-new copy would better than fine? How much crap do you ship because it’s easier/cheaper to just ship it than to get a new or better one?

Given that I’m moving house in about three weeks, I have a close and direct sympathy with what Maly is saying there – I’m not looking forward to disassembling my furniture and having it driven 270 miles in a van just so I can reassemble it at the other end. Molecular-level fabrication may seem that little bit too science fictional to believe right now, of course, but that’s what we thought about ubiquitous consumer-grade computing back in the early eighties… [image by Dano]

And by the way, if you like the cut of Mr Maly’s jib, keep your eyes peeled – there’ll be some interesting news in the next week or so here at Futurismic. 😉

[ * Please note that I have no wish to see postmen put out of work, and I’m not the sort of person who believes that unions or striking should be illegal. However, striking in this age of social media is observably self-defeating, and as much as corruption and mismanagement have exacerbated the problem, the business model that the Royal Mail has been operating under for so long is withering away as a result of circumstance and technological change as much as malice. Or to put it another way, playing King Canute is only going to get you wet feet. It’s a sad thing, but it’s also inevitable. ]

4 thoughts on “Tomorrow’s world: the demise of Fed-Ex”