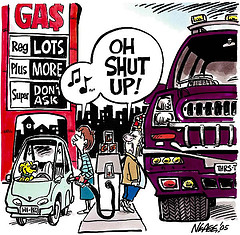 Here’s the agenda for this item: I distinctly remember that when I was a kid, sometimes–not always–the smell of gasoline would get me what one would today call high. It’s been a long time since it had that effect on me, but I also remember looking forward to those visits to the gas station.

A new study, published in the open access journal BMC Physiology, has shown that rats exposed to fumes from leaded and unleaded gasoline become more aggressive.

Amal Kinawy, from Cairo University, Egypt, examined the emotionally incendiary properties of gasoline in three groups of male rats, each exposed to either leaded-gas fumes, unleaded-gas fumes or clean air. As well as observing the animals’ behavior, she studied any resulting neurological and physiological changes. She said, “Millions of people every day are exposed to gasoline fumes while refuelling their cars. Exposure can also come from exhaust fumes and, particularly in the developing world, deliberate gasoline sniffing as a means of getting high”.

The research demonstrates that rats exposed to either kind of fuel vapor showed increased aggressive behavior, such as more time spent in belligerent postures and increased numbers of actual attacks, in comparison to the clean air group.

Can’t recall either of my parents remarking on any strange behavior on my part. Not because of that, anyway. The ever-traditional more research is needed to rush to assumptions about gasoline vapor’s effect on humans, but it’s one more thing to worry about.

(Leather in shoe stores, too, gave me a distinct high, but that’s another fetish) (Call me) (Airplane glue, not so much)

2 thoughts on “Of vapor and violence: Do gasoline fumes fuel aggression?”