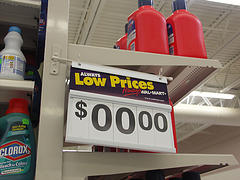 The tussle began last month as a relatively trivial but highly public back-and-forth over which company had the lowest prices on the most anticipated new books and DVDs this fall. By last week, it had spread to select video game consoles, mobile phones, even to the humble Easy-Bake Oven […]

“It’s not about the prices of books and movies anymore. There is a bigger battle being fought,” said Fiona Dias, executive vice president at GSI Commerce, which manages the Web sites of large retailers. “The price-sniping by Wal-Mart is part of a greater strategic plan. They are just not going to cede their business to Amazon.”

And you can’t blame them for that. But will it work? Pundits have been predicting the demise of big-box retail on and off for most of the past decade, but Amazon’s recent massive gains might be the first solid sign of the tipping point:

This fight, then, is all about the future. Rapid expansion by each company, as well as profound shifts in the high-tech landscape, now make direct confrontation inevitable. Though online shopping accounts for only around 4 percent of retail sales, that percentage is growing quickly. E-commerce did not suffer as deeply as regular retailing during the economic malaise, and it is recovering faster than in-store shopping.

For rivals both real and putative, Amazon is expanding its slice of the retail pie at what must be an alarming rate. In the third quarter of this year, regular retail sales dipped by about 4 percent and e-commerce over all was flat. But Amazon sales shot up 24 percent, sending its shares soaring.

Amazon’s overheads per sale are, I presume, that much lower: no shop-floor staff to pay for, for a start. Or shop floors, for that matter…

The question is, of course, whether a victory by either side will actually work out better for us, the consumer. Lower prices are all well and good, but if they’re accompanied by increasing unemployment in the retail sector, will there be any real net gain?

I really like this quote from a former Circuit City executive, though:

“We have to put our foot down and refuse to let them grow more powerful,” she said. “I applaud Wal-Mart. It’s about time multichannel retailers stood up and refused to let their business go away.”

I now have this vision of the serried ranks of Wal-Mart’s executives stood outside Amazon HQ and sternly shaking their fingers at it. King Canute costume optional? [via SlashDot; image by lordcolus]