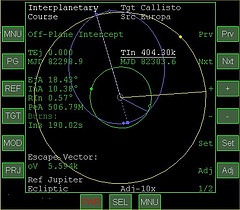 We all know that space battles as depicted in films and television tend to reuse the paradigms of more familiar planet-side combat types – the naval manoeuvres of Star Trek, for example, or the dog-fighting planes of Star Wars. But what would real combat between space-faring civilisations actually involve, strategically and tactically?

Well, Joseph Shoer’s the man to ask! He’s an aerospace engineer and physicist, and he recently wrote a post running through the main considerations of realistic space combat – everything from the difference between engagements in orbit and engagements in “deep space”, to why kinetic weapons are more efficient than explosive payloads, and plenty more in between. If you’re a fan or writer of space opera, it’s a must-read; here’s a taster.

First, let me point out something that Ender’s Game got right and something it got wrong. What it got right is the essentially three-dimensional nature of space combat, and how that would be fundamentally different from land, sea, and air combat. In principle, yes, your enemy could come at you from any direction at all. In practice, though, the Buggers are going to do no such thing. At least, not until someone invents an FTL drive, and we can actually pop our battle fleets into existence anywhere near our enemies. The marauding space fleets are going to be governed by orbit dynamics – not just of their own ships in orbit around planets and suns, but those planets’ orbits. For the same reason that we have Space Shuttle launch delays, we’ll be able to tell exactly what trajectories our enemies could take between planets: the launch window. At any given point in time, there are only so many routes from here to Mars that will leave our imperialist forces enough fuel and energy to put down the colonists’ revolt. So, it would actually make sense to build space defense platforms in certain orbits, to point high-power radar-reflection surveillance satellites at certain empty reaches of space, or even to mine parts of the void.

One thought on “The physics of space battles”