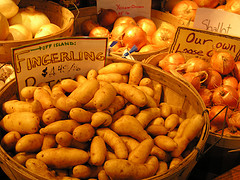 Taking a brief break from grim predictions of hyperlocal terrorism and the decline of the nation-state, John Robb hypothesises about a way to solve the looming problem of localised food production: why not make permaculture into a sort of MMO game?

Riffing on the popularity of Farmville (which I suspect bears about as much relation to real farming as a round of Arkanoid bears to real atmospheric re-entry in a spaceship), Robb suggests that boosting the fun and competitive aspects of farming projects in meatspace could be a great way to build more resilient communities:

… the current state of software that aids the design of permaculture plots is pretty dismal. The best people can do is cobble together mapping software, 3D landscape modeling software, and some auto CAD. Of course, it is possible if the resources were available (my team of developers could do it), to build software that enables people to design, optimize, and share permaculture plots, that misses a great opportunity.

The real opportunity is to build a learning system via software, one that naturally trains the people that use it, gets better and more sophisticated over time, and is fun. The only way I know how to do that is build a game.

One of the first things to do, is build a simple Farmville type social game that helps people learn permaculture design principles…

I’ll admit to being cynical on this one; I think the fun elements of a social game based on farming would be swiftly forgotten when it came to the first day of digging irrigation channels under a blazing sun. But maybe not… and Robb’s idea might work well in developing nations where the bulk of people are already farmers, enabling them to learn and shift to new and more sustainable techniques over time. [image by JoePhoto]

3 thoughts on “Permaculture as an MMO?”