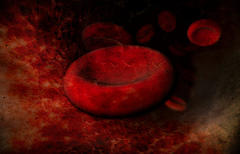 No, not the Halloween dress-like-a-zombie fake blood – we’re talking entirely artificial polymer replacements for red blood cells, which could potentially be used for transfusions in the absence of donated blood [image by Andrew Mason]:

They start out as spherical cells which then collapse into mature red blood cells following exposure to various substances. Similarly, Mitragotri’s team found that if they added small balls made of a polymer called PLGA to a particular solvent, the spheres would collapse into a biconcave shape.

The researchers coated these 7-micrometre across, tyre-shaped particles, in a layer of protein. When they dissolved away the polymer core, a soft biodegradable protein shell was left behind with the same mechanical properties as red blood cells.

The fake cells also seem to share red blood cells’ ability to transport substances. One of the proteins Mitragotri added to the surface of the imitation blood cells was haemoglobin, the molecule that binds to oxygen in the lungs, later releasing it elsewhere in the body.

In test tube experiments, the researchers found that their haemoglobin-coated particles picked up oxygen when there was a lot around and released it later when the concentration was lower. If the squishy particles do the same thing when injected in animals, they could be given to people instead of a blood transfusion.

To see if the protein shells could also carry drugs, Mitrogotri’s team exposed them to the anti-clotting drug heparin. Sure enough, the particles soaked up the heparin and then released it later on when they were moved to an area of lower concentration.