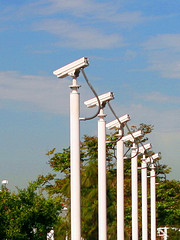 Sometimes it really feels like science-fictional thinking is becoming a much more mainstream thing to do. Following on from yesterday’s mention of CCTV control software that can learn to recognise suspicious behaviour (as defined by operator feedback, natch), out-bound BoingBoing guest blogger Paul Spinrad decided to think out loud about what might happen in a society where you were always under surveillance in public. Granted, BoingBoing isn’t exactly aloof from the sf-nal mindset, but even so…

Teenage girls become statistically less fearful about body image, and anorexia rates drop. Rifts develop between groups with different attitudes towards concealment. A tipping point is reached, and in the Prisoner’s Dilemma of female modesty, power is taken back by the unionized-sisterhood strength of concealment over the winner-take-all competition of the freer playing field. Male attitudes toward women change as a result.

Meanwhile, law enforcement and the intelligence community don’t want faces covered, with all their face-recognition and tracking software. So anti-concealment laws are put in place. The cool rebel kids (along with true criminals) also push in the direction of concealment. A mini industry springs up of wearable concealing devices, analogous to radar jammers and license plate concealers, with a similar “arms race” between laws and the innovations designed to circumvent them. Welcome to the see-easy; check your headcover at the door.

The comment thread quickly knocks down the female modesty theory, but I think we can see the beginnings of that cold-war-ish escalation of technological advancement from the second paragraph happening right now… certainly in my RSS feeds, anyway.

I’m reminded again of David Brin’s Transparent Society, and remain convinced that sousveillance would be of great social benefit in the longer run. Private and gubernatorial surveillance, on the other hand, is terrifying me more and more as the months go by; the only upside I can see is that I’ll get my naive teenaged wish of living in a Gibsonian cyberpunk dystopia… [image by Caveman 92223]