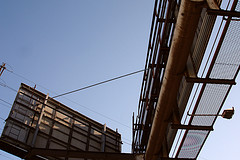 So, welcome back! Did you have a good holiday? I did… though the season comes with its share of annoyances, and if you’re anything like me you’ll be a happy human if you never see a perfume or aftershave advert again for as long as you live.

But pity the Los Anglelinos for a moment, because at least you can turn off (or away from) the glare of television advertising. Not so with the spreading crop of digital billboards; the LA Times reports on the efforts of local residents to combat the 24-hour lightbath they provide, most of which involve questioning the legality of the permits acquired by the billboard companies [via @Ballardian, who in turn got it from @BLDGBLOG].

Sadly, I suspect the protesting residents will end up looking like King Canute over the long haul. But I also fully expect we will see digital signage become a target for activist hacker types, as speculatively predicted by Lauren Beukes in her recent near-future post-cyberpunk novel Moxyland (which I reviewed for Strange Horizons a little while back, and heartily recommend to readers who enjoy the sort of fiction we publish here at Futurismic). Everything Can And Will be Hacked, after all… and digital advertising media offer all sorts of new and cunning opportunities for a smart adbuster or subcultural counterpropagandist.

Naturally, the billboard companies will push back hard against their opponents (and I’d fully expect legal grey areas to be colonised by both sides of the fight). But there’s one company that makes its money through advertising that doesn’t seem too worried about people trying to prevent ads intruding on them. That company is Google (of course), who’ve cheerily announced that they’re unconcerned about people building ad-block extensions for their Chrome browser… and that they suspect ad-blocking will actually save online advertising as a business model by a sort of Darwinian selection process [via SlashDot]. Says Google engineering director Linus Upson:

“It’s unlikely that ad blockers will get to the level where they imperil the advertising market, because if advertising is so annoying that a large segment of the population wants to block it, then advertising needs to get less annoying.

“There will always be some group of people who want to block ads for personal reasons. But if we do a good job on the advertising side, people won’t want to block ads. People will find them actually useful.

An unfashionable faith in market forces, there, but I rather suspect it’ll be vindicated in the long run. And hey, let’s be positive – maybe the arrival of ubiquitous augmented reality will spell the end of ugly billboards, digital or otherwise. Who’s gonna build them once it’s easy to ensure you never see them? [image by Omar Omar]

One thought on “Fighting back against the advertising overload”