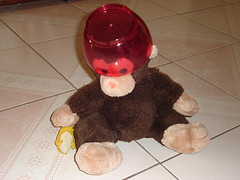 I had to agree with Jay Lake when he Tweeted that ‘Any article with the line “Any monkeys sent into space will be supervised by robots.” is totally FTW’. [image by kiewic]

And here is that article… which is actually just a short post on the Freakonomics blog pointing to a longer piece at the Telegraph, which describes Russian plans to simulate a Mars mission using simian cosmonauts:

The Institute is in preliminary talks with Russia’s Cosmonautics Academy about preparing monkeys for a simulated Mars mission that could lay the groundwork for sending an ape to the Red Planet, he said.

Such an initiative would build on Mars-500, a joint Russian-European project that saw six human volunteers confined in a capsule in Moscow for 120 days earlier this year to simulate a Mars mission.

“But given the length of the flight to Mars, and given the cosmic rays for which we don’t have adequate protection over such a long trip, discussions have focused recently on sending an ape instead of a person.”

If Russia pursues the idea of sending monkeys to Mars, Mikvabia’s institute could become the site of an enclosed “biosphere” where apes would be kept for long periods to simulate space flights.

The Institute said a robot would accompany the first primate to Mars to feed and look after the ape.

Monkeys en route to Mars with their robot overseers? There’s a whole raft of story ideas right there…