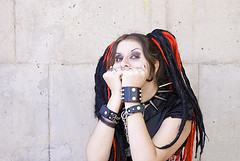 Well, it turns out my mother may have been right after all* – listening to music with positive messages in the lyrics encourages consideration and empathetic behaviour in teenagers, according to research at the University of Sussex here in the UK. Apparently, people who listen Michael Jackson’s “Heal the World” are more likely to help pick up some knocked-over pencils than those who’ve listened to a neutral or negative tune. [image by Vagamundos]

(I’ve obviously been emotionally mutilated by a lifetime of listening to hirsute and/or black-clad people torturing guitars… if presented with a bunch of pencils in the presence of Michael Jackson songs, my first instinct would be to jam one up each nostril and headbutt the nearest desk until I achieved release.)

But this throws an interesting light on Jetse de Vries’ call for optimistic science fiction – if the same psychology pertains to the written word as it does to music, perhaps science fiction readers (and writers) really would be more positive in their outlook if there were more stories written in such a mode.

[ * – This sentence is purely included for stylistic effect; as should be completely obvious, my mother was always right about everything. ]

One thought on “Cheer up, emo writer – maybe positive sf really could make you more positive.”