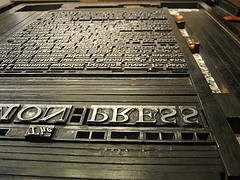 Via a whole bunch of sources comes this piece by former publisher Richard Nash at Galleycat – an eight-point bullet list of the changes he expects to see in the publishing industry over the next ten years. [image by adactio]

There’s nothing in there that you’ll not have heard from various prophets of hegemonic disruption, but to have a former publisher repeating it on a site which is very much a core industry organ (at least in the online sphere) suggests a certain degree of grudging acceptance of the changes coming down the pike. Here’s a couple of my favourites:

6. In 2020 we will look back on the last days of publishing and realize that it was not a surfeit of capitalism that killed it, but rather an addiction to a mishmash of Industrial Revolution practices that killed it, including a Fordist any color so long as it is black attitude to packaging the product, a Sloanist hierarchical management approach to decision making, and a GM-esque continual rearranging of divisions like deck chairs on the Titanic based on internal management preferences rather than consumer preferences.

One thought on “What will publishing look like a decade from now?”