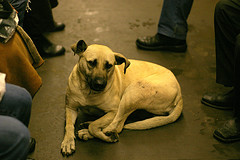 2 thoughts on “The uncanny evolution of Moscow’s stray dogs”