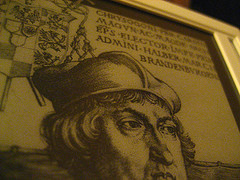 Unless you’ve been sleeping under a large rock that blocks wi-fi and cellphone signals for the last three days, you’re probably already aware of the Amazon/Macmillan ebook pricing spat that kicked off late last week. We’re hearing a lot about it in the sf-nal blogosphere, what with Tor Books being a Macmillan subsidiary as well as one of the biggest genre fiction publishers around. [image by tvol]

But just to bring you up to speed, here’s a few bits of commentary from the author’s side. First, Cory Doctorow points out that the war between these two businesses will end up harming writers and readers most of all:

If true, Macmillan demanding a $15 pricetag for its ebooks is just plain farcical. Although there are sunk costs in book production, including the considerable cost of talented editors, copy-editors, typesetters, PR people, marketers, and designers, the incremental cost of selling an ebook is zero. And audiences have noticed this. $15 is comparable to the discounted price for a new hardcover in a chain bookstore, and it costs more than zero to sell that book. Demanding parity pricing suggests that paper, logistics, warehousing, printing, returns and inventory control cost nothing. This is untrue on its face, and readers are aware of this fact.

If true, Amazon draping itself in the consumer-rights flag in demanding a fair price is even more farcical. Though Amazon’s physical-goods sales business is the best in the world when it comes to giving buyers a fair shake, this is materially untrue when it comes to electronic book sales, a sector that it dominates. As mentioned above, Amazon’s DRM and license terms on its Kindle (as well as on its Audible audiobooks division, which controls the major share of the world’s audiobook sales) are markedly unfair to readers. Amazon’s ebooks are locked (by contract and by DRM) to the Kindle (this is even true of the “DRM-free” Kindle books, which still have license terms that prohibit moving the books). This is not due to rightsholder-demands, either: as I discovered when I approached Amazon about selling my books without DRM and without a bad license agreement for Kindle and Audible, they will not allow copyright owners to modify their terms, nor to include text in the body of the work releasing readers from those terms.

Next up, a pretty good economic deconstruction of the situation from Charlie Stross:

From the point of view of Jeff Bezos’ bank account, Amazon is the entire supply chain and should take that share of the cake that formerly went to both wholesalers and booksellers. They do this by buying wholesale and selling retail, taking up to a 70% discount from the publishers and selling for whatever they can get. Their stalking horse for this is the Kindle publishing platform; they’re trying to in-source the publisher by asserting contractual terms that mean the publisher isn’t merely selling them books wholesale, but is sublicencing the works to be republished via the Kindle publishing platform. Publishers sublicensing rights is SOP in the industry, but not normally handled this way — and it allows Amazon to grab another chunk of the supply chain if they get away with it, turning the traditional publishers into vestigial editing/marketing appendages.

The agency model Apple proposed — and that publishers like Macmillan enthusiastically endorse — collapses the supply chain in a different direction, so it looks like: author -> publisher -> fixed-price distributor -> reader. In this model Amazon is shoved back into the box labelled ‘fixed-price distributor’ and get to take the retail cut only. Meanwhile: fewer supply chain links mean lower overheads and, ultimately, cheaper books without cutting into the authors or publishers profits.

Amazon are going to fight this one ruthlessly because if the publishers win, it destroys the profitability of their business and pushes prices down.

And here’s Tobias Buckell trying to explain the situation to people who think authors are being greedy by having ebook versions of their books available at high price points (as if they had the choice). It’s a lengthy post that goes into considerable detail about the costs of publishing ebooks, and takes on the perspective of both readers and writers in a down-to-earth way, so do go and read the whole thing.

… price fixing is not the answer to the eBook dilemma. Letting volume grow from the single digit percentages it is, while giving publishers the flexibility to experiment and play is not the end of the world some claim it to be.

So Amazon has the right to pull the list. It’s part of the negotiating game. They did this to Hachette UK earlier this year in the same manner to force Hachette to play the game according to Amazon’s rules, as it set them up when Amazon first started selling Kindle books. Hachette folded, Amazon views this as a way to get publishers to do what they want.

The reason Macmillan is asking for a change in the way things are done, is because Apple has released an new program, and it offers publishers a program more in line with what they think will work: including some flexibility in early release prices. This now means Kindle is not the big kid anymore, as many are assuming Apple will pull a repeat iTunes store.

Whether or not that happens, I don’t know. But Amazon seems to find the nuclear option okay, and after years of working to send them a lot of business, this is a reverse blow. Because of my online presence, over half of all my print and eBooks are sold via them. Just as they have the right to do this, I have the right to be pretty friggin’ pissed that they think this is the way to negotiate, or build good will in any way.

And here’s some high-snark disparagement from John Scalzi, who points out that – regardless of economics, fairness or anything else – Amazon’s poor handling of the whole fracas is a public relations SNAFU of massive proportions that may well end up doing exactly what they didn’t want it to:

Amazon apparently forgot that when it moved against Macmillan, it also moved against Macmillan’s authors. Macmillan may be a faceless, soulless baby-consuming corporate entity with no feelings or emotions, but authors have both of those, and are also twitchy neurotic messes who obsess about their sales, a fact which Amazon should be well aware of because we check our Amazon numbers four hundred times a day, and a one-star Amazon review causes us to crush up six Zoloft and snort them into our nasal cavities, because waiting for the pills to digest would just take too long.

These are the people Amazon pissed off. Which was not a smart thing, because as we all know, the salient feature of writers is that they write. And they did, about this, all weekend long. And not just Macmillan’s authors, but other authors as well, who reasonably feared that their corporate parent might be the next victim of Amazon’s foot-stompery.

And all of this is why a final, ironic bit of Amazon fail will come to pass:

7. Because Of the Idiotic Events of This Weekend, People Will Just Want an iPad Even More.

I’ve no idea how soon this matter will be settled, but the economics behind the situation aren’t going to go away, and ripples from this particular rock-in-the-lake will be washing ashore for some time to come. Personally, I want a fair deal for the authors first and foremost… and as much as I’ve long been an advocate of the free-to-read and freemium business models for publishing, I find myself worrying for the first time as to whether or not there’s enough expendable money in the system to support the literary ecosystem as it exists today. Here’s hoping.