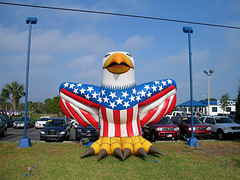 People can be very quick to make jokes about the lack of knowledge some Americans have about the countries beyond their borders, but the opposite can also be true. Damien Walter recalls a discussion he had with Neil Gaiman at last year’s Clarion writer’s workshop about “Americaland” – the bundle of cultural shorthands and cliches that go to make up the fictional USA where British (and other) writers tend to set their stories:

Americaland is real place for British writers, it is built from thousands of fragments of American TV, films, music, comics and other cultural artefacts. It’s a place filled with 1950’s dinners and long desolate highways among other things. And its just as imaginary as a Britain filled with red telephone boxes and bowler hatted business men.

(One draw of Americaland is the British tendency towards naffness…IE…any story that seems fascinating and dark in Americaland becomes utterly naff if you transplant it to the UK. Batman in Gotham = Dark Knight. Batman in Birmingham = mentalist in tights. If you are British and want to write Batman, or any other American archetype, then welcome to Americaland.)

[Batman in Birmingham… I’d buy that comic, personally. DC should give the franchise to Grant Morrison for a few years… “Mentalist in Tights” = Best Tagline Ever.]

Americaland is as much a fantasy world as Middle Earth or Dune. Some of the most fascinating fantasy worlds are the ones that overlap our reality so closely that the reader can almost accept them as real. Perhaps that’s why Americaland, with all its inaccuracies and cliches, can be such a compelling place to set stories in. Whenever I turn my hand to any story of the horrific or dark fantasy variety, I find Americaland creeping in from the edges. However hard I try to root these stories in the Britain I know, American locations and characters crop up again and again. When I turned to my imagination for material this weekend, it gave me a man and woman meeting in a diner and going on a road trip. It’s a story that can only take place in Americaland. So do I accept where my imagination is taking me, for all its flaws, or rail against it and force myself to write in British settings?

It’s a good question – should you only write what you know? And if not, how would you recommend a non-native get a feel for the real USA without the expense of a pair of plane tickets and a few months of travelling? [image by dno1967]

And to our American readers: what are the most egregious Americaland cliches you see in the writing of non-American authors, and how should they be corrected?

9 thoughts on “Americaland: writing the US from beyond its borders”