Pop-transhumanist organ H+ Magazine assigned a handful of writers to quiz AI experts at last year’s Artificial General Intelligence Conference, in order to discover how long they expect we’ll have to wait before we achieve human-equivalent intelligence in machines, what sort of level AGI will peak out at, and what AGI systems will look and/or act like, should they ever come into being.

It’s not a huge sample, to be honest – 21 respondants, of whom all but four are actively engaged in AI-related research. But then AGI isn’t a vastly populous field of endeavour, and who better to ask about its future than the people in the trenches?

The diagram below shows a plot of their estimated arrival dates for a selection of AGI milestones: 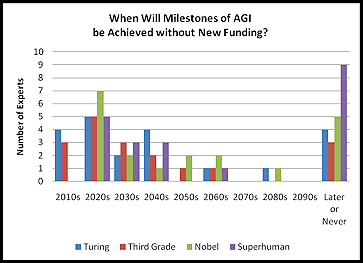 The gap in the middle is interesting; it implies that the basic split is between those who see AGI happening in the fairly near future, and those who see it never happening at all. Pop on over to the article for more analysis.

The supplementary questions are more interesting, at least to me, because they involve sf-style speculation. For instance:

… we focused on the “Turing test” milestone specifically, and we asked the experts to think about three possible scenarios for the development of human-level AGI: if the first AGI that can pass the Turing test is created by an open source project, the United States military, or a private company focused on commercial profit. For each of these three scenarios, we asked them to estimate the probability of a negative-to-humanity outcome if an AGI passes the Turing test. Here the opinions diverged wildly. Four experts estimated a greater than 60% chance of a negative outcome, regardless of the development scenario. Only four experts gave the same estimate for all three development scenarios; the rest of the experts reported different estimates of which development scenarios were more likely to bring a negative outcome. Several experts were more concerned about the risk from AGI itself, whereas others were more concerned that humans who controlled it could misuse AGI.

If you follow the transhumanist/AGI blogosphere at all, you’ll know that the friendly/unfriendly debate is one of the more persistent bones of contention; see Michael Anissimov’s recent post for some of the common arguments against the likelihood of friendly behaviour from superhuman AGIs, for instance. But even if we write off that omega point and consider less drastic achievements, AGI could be quite the grenade in the punchbowl:

Several experts noted potential impacts of AGI other than the catastrophic. One predicted “in thirty years, it is likely that virtually all the intellectual work that is done by trained human beings such as doctors, lawyers, scientists, or programmers, can be done by computers for pennies an hour. It is also likely that with AGI the cost of capable robots will drop, drastically decreasing the value of physical labor. Thus, AGI is likely to eliminate almost all of today’s decently paying jobs.” This would be disruptive, but not necessarily bad. Another expert thought that, “societies could accept and promote the idea that AGI is mankind’s greatest invention, providing great wealth, great health, and early access to a long and pleasant retirement for everyone.” Indeed, the experts’ comments suggested that the potential for this sort of positive outcome is a core motivator for much AGI research.

No surprise to see a positive (almost utopian) gloss on such predictions, given their sources; scientists need that optimism to propel them through the tedium of research…. which means it’s down to the rest of us to think of the more mundane hazards and cultural impacts of AGI, should it ever arrive.

So here’s a starter for you: one thing that doesn’t crop up at all in that article is any discussion of AGIs as cult figureheads or full-blown religious leaders (by their own intent or otherwise). Given the fannish/cultish behaviour that software and hardware can provoke (Apple /Linux/AR evangelists, I’m looking at you), I’d say the social impact of even a relatively dim AGI is going to a force to be reckoned with… and it comes with a built-in funding model, too.

Terminator-esque dystopias aside, how do you think Artificial General Intelligence will change the world, if at all?