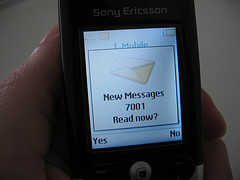 Wrong… unless those 40,000 words they text out over a month don’t count [via LifeHacker; image by nate steiner].

Sure, a lot of those texts will be rote replies and simple questions, but the point stands: teenagers communicate heavily using a form of the written word. When I was a teenager in the nineties I used to write a lot of letters, but I’d be very surprised if I approached a tenth of that wordcount, which equates to the lower limit for a novel (or at least it used to). Text has a lower bandwidth than face-to-face speech, but SMS messages have the advantage of asynchronicity over a regular phone call, and as gnomic as the compressed words and pseudo-1337 of text messages may be to us older folk, they have the same capability for hidden meaning and word-play as “proper” writing.

Where am I going with this? I’m not sure, to be honest… but I’m increasingly convinced that blaming technologised teen lifestyles for their perceived disinterest in reading is a fiction born of contempt and generational differences. The “cellphone novel” is a popular format in Japan – has anyone really tried pushing it here in the West? Or will we need to wait for that generation to grow its own stars and mavens organically without the help of old-media gatekeepers?

3 thoughts on “Teens don’t read and can hardly write, right?”