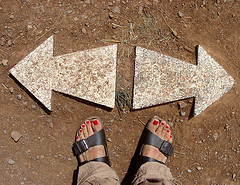 Biology professor Anthony Cashmore at the University of Pennsylvania reckons that free will is illusory, and that believing in it is something akin to religious faith:

One of the basic premises of biology and biochemistry is that biological systems are nothing more than a bag of chemicals that obey chemical and physical laws. Generally, we have no problem with the “bag of chemicals” notion when it comes to bacteria, plants, and similar entities. So why is it so difficult to say the same about humans or other “higher level” species, when we’re all governed by the same laws?

As Cashmore explains, the human brain acts at both the conscious level as well as the unconscious. It’s our consciousness that makes us aware of our actions, giving us the sense that we control them, as well. But even without this awareness, our brains can still induce our bodies to act, and studies have indicated that consciousness is something that follows unconscious neural activity. Just because we are often aware of multiple paths to take, that doesn’t mean we actually get to choose one of them based on our own free will. As the ancient Greeks asked, by what mechanism would we be choosing? The physical world is made of causes and effects – “nothing comes from nothing” – but free will, by its very definition, has no physical cause.

All of a sudden, I’m reminded of Nick Bostrom’s simulation argument – perhaps the reason we can’t see a mechanism for free will is that we’re not actually real? Which is a heavy thought for a Monday morning… compare and contrast with Luc Reid’s summary of the neuroscience status quo, and it’s plain to see there’s a whole lot we just plain don’t understand. [image by Julia Manzerova]

Personally, I’m currently leaning somewhat toward the idea that our consciousnesses are enabled by quantum effects caused by entanglement with near-identical minds in universes closely similar to our own… but that probably has more to do with the fact that I finally finished reading Neal Stephenson’s Anathem last week than anything else.

3 thoughts on “No fate but what we make… or maybe not. Is free will an illusion?”