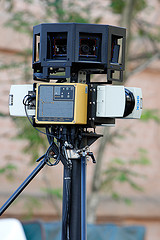 The city of Windsor in Ontario, Canada has apparently requested Google reshoot some of its Street View footage in order to remove a murder scene (complete with Do Not Cross police tape barriers and bloody bandages) from the public record, prompting Mike Masnick of TechDirt to wonder…

The threat of being seen without one’s “make-up” on has always been around. For instance, I can still remember the way every school I ever attended spent a week gussying the place up and drilling the students in advance of the government inspectors, which was probably one of my earliest cognitive dissonance awakenings – what was the point of inspections if they only occurred after a metaphorical wash’n’brush-up? Why not just, y’know, improve things generally rather than making a last-minute effort once a year*?

This feeds into the idealistic notion that ubiquitous transparency is a good thing, I suppose: if every city (or school, or whatever) knew it could be inspected (or Street View’d) at any time without warning, then perhaps they’d be more likely to fix problems at the root cause instead of sweeping the problems under the rug before the visitors arrive.

Of course, that’s a massive oversimplification of a very complex issue, but the Windsor story is a harbinger of institutional panics yet to come; much as technology could enable nation-states to turn themselves into panopticons, the spotlight can also be pointed in the other direction. The next few decades will be all about the struggle between individuals and corporate or geo-political entities to filter and control their realities as presented to the rest of the world… which is why I’m fairly convinced that augmented reality will be the multi-planar battlefield of manifold and fractal ideological struggles between citizens, states and corporations.

[ * The answer is very obvious now, of course, with the benefit of experience (and the cynicism toward institutions and bureaucracy that it engenders), but for a naive and nerdy seven year old, it was a baffling condundrum. Pity my poor parents attempting to explain these moral grey areas and fundamental societal flaws to a child with no better an instinctive or empathetic grasp of human nature than the Borg… ]

One thought on “Cleaning up for Street View”