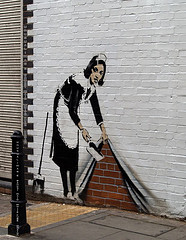 Pity poor Banksy for a moment. There can surely be no better icon of the noughties Zeitgeist in urban art… but how to convert that incredible reputation and kudos into decimal places that will pay the rent? Banksy and his street-art contemporaries are trapped by their medium, because it’s hard to sell off your work when it happens to adorn a fundamental structural component of a building that belongs to someone else. And harder still when any random guy with a sci-fi webzine can freely republish a CC-licensed photograph taken by someone else that just happens to feature your work… oh, Monsieur Derrida, what have we done? [photo by unusualimage, art by Banksy, wall by uncredited building contractor]

If you’re thinking “well, I’m not sure money was Banksy’s motive”, then bravo – and I’m inclined to agree, given how hard he’s worked to stay anonymous (and how easy it would be for him to coast to fame on a brief cash-in and flee once the tide turned). But not so, perhaps, for the hordes of his imitators, and the other career street-artists who first rose to visibility and pseudo-respectability in the wake of the mainstreaming of hip-hop culture, and other creators whose work inhabits the interstices of law; whatever you may think of their methods, motives and legal transgressions, these are real artists doing real work… and they want to make a buck from it, too.

They face a similar problem to that of musicians in the internet age, in that they can’t control the distribution of their actual creation (albeit for very different reasons – musicians suffer from the economics of superabundance, while street artists are at the mercy of a type of scarcity), and so similar business models apply – you sell emphemera and scarce goods connected to the work rather than the work itself. For a street artist, that’s posters and prints, maybe clothing… whatever you can come up with, really.

Seems obvious enough… but unlike musicians, street artists (or at least the ones with any common sense) are obliged to remain anonymous lest they be prosecuted for vandalism. So putting up a URL to your webstore is a bit of a no-no… if the council are willing to email concert promoters who flypost in order to serve notices of prosecution (and believe me, they are), the anti-graff office will be all over your WHOIS records and server logs like a rash once you’ve got a profile big enough for people to want to buy your stuff. What you need is a middle-man who’ll collect your takings and pass them on, but who won’t blow your cover to The Suits.

There’s an old dawn-times saw about the internet that says it has a tendency to destroy middlemen, but if anything, the opposite seems to be true – the internet enables at least as many new middlemen business models as it destroys. Sure, it gives everyone with access to it an unprecedented ability to communicate directly with most of the world, but who has the time to do that if they’re busy writing novels, recording albums, weaving anatomically-correct crochet models of mammalian brainstems, or sleeping late so they can prowl the city streets at 4am with some stencils, a balaclava and a carry-all full of Krylon? You’re too busy creating your work to market it, so you let someone else handle that side of things for you, and give them a cut of the take for the privilege.

What other forms of work – more legal, or less – could benefit from this sort of anonymous clearing house/stock exchange system? Or are middlemen only flourishing temporarily in this frontier-esque era because the tools to accomplish the necessary tasks aren’t easy for newcomers to get to grips with?