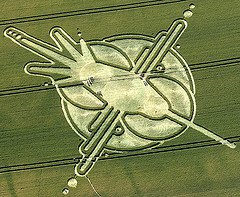 BoingBoing is currently playing host to one Jaques Vallee as guestblogger, and he’s been riling up the (admittedly easily-riled) BB comment-swarm by talking with some degree of seriousness about crop circles. [image by trodas]

I’ve got a real weak spot for crop circles, because I grew up in a part of the UK countryside where they have always been prevalent, and because as a teenager I was already waist-deep in genre fiction, occultism and conspiracy theory (yeah, I’ve totally seen the fnords, man). Nowadays I consider myself to be a lot more critical and rational than I was back then… albeit tempered with an awareness of how compelling the less-than-rational explanations for odd occurrences can be. In other words, I try not to knee-jerk on weird happenings (though I don’t always succeed – I’m still human, or at least I was last time I looked).

Now, the rational explanation for crop circles is that they’re man-made hoaxes, and indeed, some of them are almost certainly exactly that. But Vallee trots out some items that lend a certain degree of credence to a rather wilder theory… namely that the tin-foil hat brigade are right, and that crop circles are evidence of some sort of energy weapon research:

(1) the phenomenon began with single circles that English and U.S. weather scientists first tried to explain as atmospheric vortices. Soon there were multiple circles in various geometric combinations, and in following years the designs became increasingly complex, leading to the idea that we were witnessing a classic, step-by-step program of technology development–not an atmospheric anomaly but not some sort of paranormal effect either.

(2) Given that SOME of the patterns were obviously man-made hoaxes, it was possible to compare the effect on the plants in genuine versus bogus patterns. Under the microscope the results were clear: if you push a board across a wheat field to flatten it, you will break the stalks between nodes because the nodes are thicker and stronger. But in the unexplained, complex patterns the nodes themselves were exploded, often keeping the fibers intact. Conclusion: something was coupling energy into the plants in the form of heat (as one of the respondents to my first post actually stated). Therefore the idea of a beam weapon is indeed one of the scenarios to consider.

(3) The crop circles are close to ancient megalithic sites, which excites the curiosity of New Age tourists from America, but they are even closer to the most highly classified military electronics labs in Britain. In fact the roads to some of the fields run between two high fences behind which defense companies are doing research, and Army helicopters routinely patrol the area.

Now, I’m not suggesting that the points above make a conclusive and compelling case, but the second item points out that, if the more complex crop circles are hoaxes, then they’re being hoaxed using a method of which we’re not yet aware, and by a group more sophisticated in its thinking and planning than the drunken agriculture students who are traditionally blamed for them.

I’m not sure where I’m going with this, really, except to say that as useful a tool as Occam’s Razor may be, it falls down in situations where the evidence is insufficient, inconclusive, or both. And that sometimes finding the simplest answer to a question merely throws up more questions, often not so easily answered.

Or to put it another way: if we assume the complex-patterned crop formations that feature burst nodes in the damaged corn are all hoaxes, who are the hoaxers? What are their methods, their motivations? I’m in no way suggesting that I’m sold on the idea of crop circles being energy weapon research detritus (if that were the case, why would the military researchers have made them consistently larger and more prone to attract public attention as the years have passed?), but once you start looking at the questions arising from the simple rational answer, the simple rational answer stops looking quite so simple and rational.

It’s thought-trains like this that make me miss Mac Tonnies. I have a great admiration for people who actively court the sort of public reaction that Vallee bemoans in his BoingBoing post; even if they’re wrong, I think they’re doing something very important for our culture as a species.