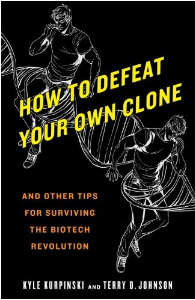 If there’s one good thing that’s come out of the cultural opposition to science in the West, it’s a wave of new popular science media. The guiding principle seems to be “make it fun, give it a hook, deliver as much hard material as you can without provoking the gag reflex”, which goes some way to explain the popularity of science blogs – small chunks of science wrapped up in tasty and palatable context is a great format for lay readers with an interest in the topic, but without the specialist knowledge to follow the journal scene. Kurpinski and Johnson’s How To Defeat Your Own Clone is full of bloggy zing, and neatly skewers numerous pop-culture skiffy clichés – the scientifically-impossible clones of cinema and television – in order to entice the reader into a topic that promises to become increasingly controversial and pertinent in the coming years.

Conflict, as any journalist or fiction author will tell you, is what attracts readers. Indeed, the marketing of How To Defeat Your Own Clone is so finely tuned that I found myself expecting something a lot dumber – but then, as Kurpinski and Johnson ask in their epilogue, “[if] this book had been called How To Befriend Your Own Clone […] would you still have picked it up?” Possibly not… but the only likely complaints about this book would come from someone expecting a few hundred pages of martial arts advice, and tips on selecting powerful weapons with exotic names suited for clone-to-parent combat. As it is, the actual advice on defeating your clone comprises at most the latter third of the book, and many of the suggested methods involve ways of approaching the situation that actively avoid the need for any sort of conflict to start in the first place. (For instance, Kurpinski and Johnson point out that the most likely reason for there to be a clone of you is because you arranged for it to be created, and that your approach to ‘parenting’ your inevitably-younger double will have a strong influence on whether you ever find yourself with a knife at your own throat, so to speak.)

The bulk of the book, then, is a kind of entry-level Genomics 101, laying out the basic principles of genetics and DNA, skirting all the scary chemical names and the unromantic tedium of the research process. I was genuinely and pleasantly surprised at just how much solid information Kurpinski and Johnson manage to convey, and found them filling a few gaps in my own (admittedly patchy outsider’s) knowledge of the subject; it might make the ideal primer to give to someone who argues that genetic engineering is a game for hubristic scientists who want to “play God”, if you can get them to read it. But it’s equally full of concise fact-nuggets that you can repurpose for yourself – for instance, I shall enjoy asking the next person to call cloning a blasphemous act whether they reserve the same righteous distaste for fraternal twins, because (as is totally obvious with the benefit of hindsight) they’re also clones of one another.

As much as Kurpinski and Johnson’s style is very accessible, flippant and Zeitgeisty, I found it a little wearing – imagine John Scalzi in high snarky dudgeon, writing in his blog voice (but at book length) about the real social implications of genetic engineering, and you’ll have an idea what’s in store. It’s a style that works well in short doses, but not so well over extended periods… which will doubtless be less of an issue for readers who don’t wolf down the whole book in one or two sittings. The short subheadered sections (another very bloggy format trick) actively invite short grazing sessions, and I found myself thinking that the book would have worked even better had it been an entirely online hypertext – internal links for important terms and recurring topics would make it even easier to dip in and out of, and heighten its utility as a reference source (and, indeed, a source of further references – the lack of even a simple index is a disappointment). That said, Nick Carr would doubtless shake his head and tell me that no one would bother reading the whole thing were it online… and perhaps he’d even be right.

All in all, though, Kurpinski and Johnson should be commended for gently yet firmly bursting a whole load of the pop culture myths around cloning and genetic engineering. The sensational-seeming frame of the title is actually almost completely inverted by the text itself, which could be seen as a primer in thinking like a science fiction writer – rather than a sci-fi moviemaker – about the real person-to-person ethical implications of a world that is literally just around the temporal corner. My only caveat would be that, given the RRP is US$14, I sincerely hope the paper quality of my review copy is not representative of the final production run; otherwise, a fun little book, and recommended as a gift for a geek.