Martin Magnusson got bored of waiting for the cyberpunk future we were promised in the mid-eighties, so he decided to build his own wearable cyberdeck rig. The version pictured [ganked from this Wired article] is a little crude, perhaps (I quite like the did-it-myself workbench aesthetic of exposed cables, personally, though it’d be a nightmare in a combat situation)), but he’s also managed to scrunch the bulk of it down into a little CD-case-shoulder-bag number for the more style-conscious geek-about-town. 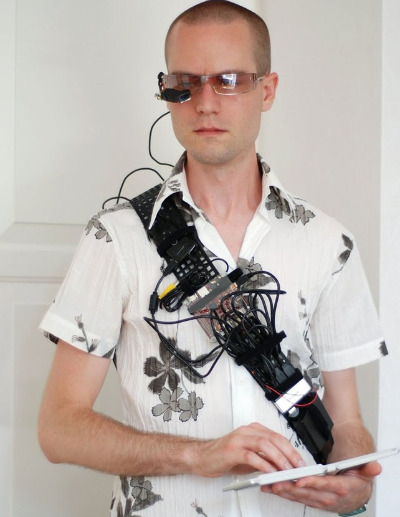 In case you’re wondering about battery life (which was my first question), Magnusson reckons he gets three hours of juice from four AA batteries, which is better than I’d have expected, though still not too awesome. Time to look at harvesting waste energy from the body, Mister Magnusson? 🙂

3 thoughts on “Wearable computing: the state of the art”