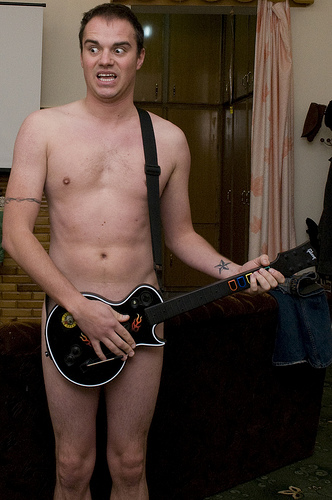 Ever have one of those dreams where you’re naked in public? Writing fiction is a bit like having a dream, and some writing is embarrassing because it lays us bare.

I’m talking about the kind of writing where you say something to the entire world that you would prefer not to mention to anyone, just because you want to tell a meaningful story. Or you do something in the story that has very little to do with you personally, that means a lot in the piece you’re writing, but that embarrasses you because you don’t want anyone to think it’s autobiographical.

Let’s dwell on that second situation for a moment, being worried that people will think you’re writing about yourself when you aren’t. This can come up with truly horrible characters — the child molester/serial killer in The Lovely Bones comes to mind — with sexual behavior or fetishes, with gender identity and sexual preference … Looking at my own work, for instance, I find a modest number of stories about lesbians but very few about gay men (though I’ve written both). Like a straight actor who’s offered a gay part in a production, straight writers may not want to be assumed to be gay by the general public. Yet there are times when a gay male would be the best choice in a story, or where a BDSM fetishist (if we’re talking about sexual behaviors) or a male-to-female transsexual (if we’re talking about gender identity) would probably be the ideal thing. Yet for me, my own concerns about what people assume get in the way, even though I’m unconflictedly in support of the LGBT community and wish that more fiction was written about non-straight people.

My writing might also be stronger if I were more willing to write characters who are racist or sexist or prejudiced in some other way I find repugnant: certainly you can’t write The Lovely Bones or To Kill a Mockingbird or The Silence of the Lambs without sharing some contemptible characters with the world. Even Holden Caulfield’s bouts of ignorance and trouble with depression in The Catcher in the Rye need that kind of commitment.

So, note to self: man up and stop worrying about what people will think.

My hope is that most intelligent people understand that there’s a difference between the author and the characters — but even if that’s not true, I care less about what people think than about what my writing does to them. If you haven’t written about people you’d cringe to have identified with you, maybe it’s time to try — just a rough draft of a short story, filled with people who really interest you but who might embarrass you. The story can be deleted or shredded afterward if necessary — although often we seem to find that stepping up to a fear drains it of its power, so perhaps you’ll surprise yourself.

The other kind of embarrassment, being embarrassed by what you reveal, may be a surprisingly rich source of material if you haven’t mined it before (or haven’t mined it lately). After all, the things we all like least about ourselves are some of the most cathartic things to read–and possibly write–about. What would Hamlet be without Hamlet’s suicidal rants, his anger at his mother, and the horribly stupid mistake of killing his would-be girlfriend’s father through a curtain? I don’t know for certain how closely Shakespeare himself identified with these kinds of elements, but he clearly understood what it was like to be jealous, what it was like to be depressed, and what it was like to make a stupid mistake that ruins your life.

This kind of embarrassment can also be therapeutic. There are few things in this world more comforting than facing a fear and finding out you can best it–that there’s no need to avoid it any more, if there ever was.

While I’m on the subject of fear of embarrassment, let me touch on one last kind: fear of being seen as incompetent. As writers, we’re likely familiar with the kinds of stories and voices people generally accept in modern fiction, and it’s pretty normal for us to produce something more or less in the same vein. Trying things that are strange and bizarre, that we have no way of knowing whether people will like, is much harder. Yet ground-breaking work often comes from writing things that would be more than a bit embarrassing if they failed. Alice in Wonderland, if it weren’t full of genius, would be creepy beyond belief. If Watership Down had failed, Richard Adams probably would not want his eventual epitaph to be “He wrote about bunny rabbits.” Kurt Vonnegut broke writing rules left and right, though fortunately he was brilliant at it, since if that writing had been bad, it would have been laughably bad.

So there lies more encouragement to stretch and embarrass ourselves, that groundbreaking fiction is often the kind that stands out in a potentially humiliating way. What’s the worst that can happen? We’ll be laughed out of our writers’ groups? I’ve been laughed out of places before. I’m not eager to repeat that kind of experience, but they haven’t been fatal.

So let’s get embarrassed! Um … you first.