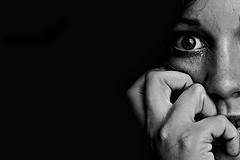 Cartoonist Bill Watterson cranked out one brilliant Calvin and Hobbes comic strip after another for about ten years. Even if (bizarrely) you aren’t a fan of Calvin and Hobbes, it’s clear Watterson knew how to create art that spoke to a lot of people in a clever, funny, and meaningful way. Here’s a conversation his two main characters  had about inspiration.

HOBBES: Do you have an idea for your project yet?

CALVIN: No, I’m waiting for inspiration. You can’t just turn on creativity like a faucet. You have to be in the right mood.

HOBBES: What mood is that?

It’s interesting how effective last-minute panic really is. I don’t know if you’ll have as many examples in your life as I do in mine, but can you recall an incident or two in which you delayed doing something because you didn’t feel like you had any good ideas, then were forced to do come up with an approach at the last minute that came out great? [image by LunaDiRimmel]

I’m not suggesting this is a formula for success, because a lot of last-minute efforts are terrible. What’s interesting about this phenomenon, though, is how often just sitting down and doing the thing–in our case, sitting down and writing–can force inspiration to appear out of nowhere.

The “inspiration on demand” idea seems directly in conflict with the “angel whispering in my ear” idea of inspiration: in the latter, a really good idea comes out of the blue and is out of the artist’s control. I actually do believe in this kind of inspiration. Our brains are chugging along all the time doing all kinds of stuff, and if on some level we as writers are aware that we’re looking for ideas, some chance collision of elements will sometimes create something spectacular. When something like this comes along, there’s nothing wrong with seizing it–although treating it as holy writ can be a problem, since there’s no guarantee the idea is already in its ideal form (see “There’s Always Another Way to Write It” and the “What Else?” portion of “Writing Differently: Picking Up the Scary Tools” ).

The problem I’m concerned about here, then, isn’t using inspiration that appears out of the blue, but rather waiting for that kind of inspiration, like Calvin. Good ideas for writing can arise on their own, but they can also be dragged out kicking and screaming. Here are a few ways to do that.

Take a story line, emotional state, event, character, or situation that interests you and throw it in with something else that isn’t usually associated. Think of Blade Runner (androids and private eyes) or Watership Down (rabbits and prescience) or Ender’s Game (children and space).

Take a cliched story setup and reverse it. Make the private eye deeply in touch with his emotions; make the bunny deadly (although admittedly, that’s been done by Mssrs. Python); write a coming-of-age story about a 72-year-old. Make those cliches wail and gnash their teeth.

One of the most engaging ways to create gripping writing is to find a way to make things worse–ideally, the worst they could possibly get (prior to you then coming up with something even worse that will happen later). Suzanne Collins starts her gripping novel The Hunger Games with a character worrying about being chosen for a deadly contest–until that worry is completely erased when the character’s younger sister is chosen instead.

What happened to you

One of the great things about real life is that it doesn’t get upset when you steal ideas from it. J.K. Rowling created some of her most engaging characters based on people she knew growing up. Bringing your own experience into a story creates an emotional immediacy that’s usually hard to come by.

At this point in this piece I find I’m coming closer to giving advice about writing than talking about motivation for writing, which means I’m getting off-topic. Let me steer back on to point out that one of the things that creates excitement about writing a story is having wonderful ideas about who and what will come up in that story as it proceeds. When the ideas (about characters, plot, setting, incidents, problems, etc.) are strong enough, we can’t wait to see what happens in our own stories, even when we already more or less know how things will come out. When we instead depend solely on ideas that volunteer themselves, really compelling ideas may be too scarce to keep us fired up–but when we generate the ideas on demand, stopping to create something amazing whenever something amazing isn’t already there for us, then we create our own propulsion, carrying us forward further and faster into our own work.

Luc Reid is a Writers of the Future winner whose fiction and nonfiction have also appeared in Clarkesworld, Strange Horizons, Abyss & Apex, and other venues. He’s the founder of the Codex online writers’ group; author of Talk the Talk: The Slang of 65 American Subcultures (Writers Digest Books, 2006); a founding member of flash fiction group The Daily Cabal; and a former radio commentator. He is currently combining his writer site, writing blog site, and psychology of habits sites into a single entity at www.willpowerengine.com . His eBook The Writing Engine: A Practical Guide to Writing Motivation, is available for PDF download on his site (free) as well as for Kindle. His new book is Bam! 172 Hellaciously Quick Stories, available at $2.99 for Kindle on Amazon and for all eBook formats on Smashwords, with a print edition expected in February.