Another installment in what seems to be an emergent and ill-defined thematic series of Bubble-era vanity projects decaying in the wake of Collapsonomics! Even more ambitious and hubristic than Japan’s Huis ten Bosch, Dubai’s artificial entertainment archipelago, modestly named “The World”, is crumbling away amidst contractual wranglings and other forms of development hell: 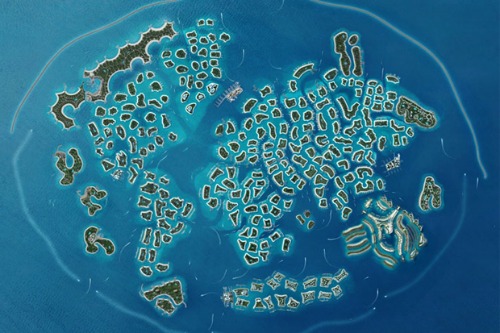 According to evidence cited before a property tribunal and discovered by the Telegraph, “erosion and deterioration” of the World has been found, with state-run developer Nakheel admitting that the project is “in a coma”. Graham Lovett, speaking on behalf of Nakheel in the tribunal, said: “This is a ten-year project which has slowed down,” but maintained: “this is a project which will be completed.”

Nakheel is part of Dubai World — the conglomerate owned by the gulf state — which was bailed out of $25 billion worth of debts at the end of 2009. The tribunal was set up to hear the cases that emerged from the separation of the companies involved. One of those companies is Penguin Marine, who bought the rights to offer boat travel to the islands — of which all but one are uninhabited. (Greenland, if you’re curious.)

Although Nakheel claims that 70 percent of the islands have been sold, investors have had trouble financing any further work. As a result, while Penguin Marine is paying a million dollars a year to Nakheel, it’s getting very little business, so is trying to exit the contract.

Penguin claims that work on the islands has “effectively stopped”, with Richard Wilmot-Smith, speaking on behalf of the company, telling judges in the tribunal that the islands’ sands are eroding and that the channels between them are silting up. Nakheel disputes this, saying: “Our periodical monitoring survey over the past three years didn’t observe any substantial erosion that requires sand nourishment.”

Now there’s a setting for a novel… where are you, J G Ballard, now that we need you the most?

One thought on “The World sinks into the sea”