Last month I wrote about crowdfunding. And I’m now into three projects, all of which succeeded (two books and a movie). When they show up, I’ll blog about them over at my site.

This month, I was questing around for a good topic when the household fourteen-year-old asked us both to watch a video. The speech happened at least fifteen years ago, but it is exactly relevant today. I found myself blinking back tears as I listened, both because the speech was so good, and because it could be delivered to the very same people today. I highly recommend that you stop for a minute and watch/listen to the talk by Severn Suzuki, which will provide some background for the rest of this column. The You Tube video of the talk is called “The girl who silenced the world for five minutes.” 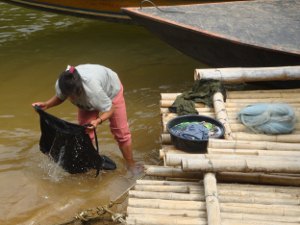 I got to thinking about why this speech moved me, and about other talks that have affected me. There are, of course, the TED talks. I’ve referenced various talks before in this column, and I find I often go there when I want to learn something new. Almost all of the speakers are good speakers and many are tops in their field. Many of the people I know also listen to these talks. A current talk that is going viral is Hans Rosling and the Magic Washing Machine. This talk has actually shown up on CNN this week. Besides the fact there’s some magic in titles, the talk is great, and I’ve listened to a lot more by. Dr. Rosling. This is, in fact, a call to action, much like Severn’s, although in a different venue, a different tone, and only partially overlapping in topic.

Another example of modern speeches that have made a splash, and hopefully a difference, is the It Gets Better project, which has a hundred and one pages of video designed to help young GLBT people realize that there is life after high school. Even President Obama took time to get into the act. One of my favorites from this is Scottish science fiction writer Hal Duncan’s video, which is in drastically different language that President Obama’s. But I have to say I’m proud of both of them. [Hal’s video brought me to tears, too – PGR.]

So…modern speeches are making a difference. They are easily watched by many of us, and more easily made and delivered than ever. Most of the hundred and one pages of speeches for It Gets Better were created by amateurs, and many are genuinely moving.

So what about the historical speeches? Dr. Martin Luther King’s “I Have a Dream” speech may be the single speech most of us have heard. There are over two and a half million views of the version speech I linked to, which Dr. King opens by talking about the emancipation proclamation, and thus references a man who gave us another famous speech, the Gettysburg Address. Unfortunately there is no YouTube video of the actual address that I can link to. Maybe someday we’ll get it via time travel.

I’ve probably heard hundreds of talks in my life. I don’t remember most of them. So why do we remember specific speeches? There are a lot of speeches that are really well-delivered every day. But we recall the ones that make us think differently, and the ones that move us. Most of the great speeches that I remember – and I suspect based on lists of great speeches from others that most of us remember – are about freedom, equality, superior effort, and just in general being better human beings.

Any futurist worth their salt is a historian. All of these speeches have already happened. They’re history. But if we think about the speeches that mattered in the past, they suggest the themes we should talk about now and in the future. Sure, they work for writing, too. But a talk is a different of communication. It comes complete with voice inflection and movement and often multimedia props. Good speeches are a rich medium that demand actual attention. And it’s pretty clear what things to talk about if we want to make a difference. Equality. Freedom. Personal responsibility. Cultural responsibility.

We need to talk about the big scary things.

If you want more: