Sincere apologies to Canuck readers and the easily offended, but I found the pictures from the Vancouver riots to be… well, pretty hilarious, actually. For possibly the first time in my life, I find myself pretty closely aligned with the vibe at Hipster Runoff, which – to spare you the effort of beating your head against deliberate and doubtless ironic subliterate txtspk – can be summed up with the phrase “sportsbros rioting LOL WHUT”. 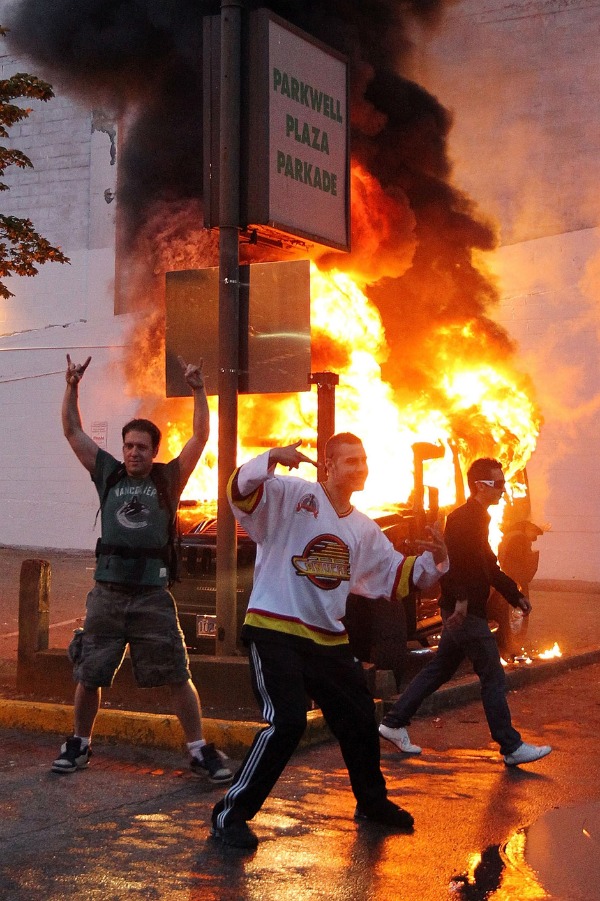 Obviously I’m not tapped into the local news sources, but from the more internationally-visible side of things there seems to be a tone of Official Condemnation tempered with a subtext of Boys Will Be Boys, very similar to the one trotted out in the UK media when football fans decide to commiserate a major loss (or sometimes even celebrate a win) for their home team by, er, smashing the hell out of their own town. (No, I don’t understand it at all, especially as I’ve been repeatedly told that supporting your local team is all about civic pride. Um, OK.)

Compare and contrast, then, to the weeks of media handwringing over Anarchist(TM) actions at things like the G20 summit or the London marches earlier this year. Clear subtext for the hard of thinking: dumb violence is just one of those things, especially when propelled by a vague sense of regionalistic fervour; however, dumb violence as part of an anti- or counter-state agenda is a shameful waste of taxpayer’s money, a threat to the security of decent people everywhere, a sign of the end times and a justification for swinging changes in the public order statutes, blah blah blah. Bread and circuses, business as usual. Plus ça change, non?

Leaving aside media coverage, though, the Hipster Runoff person raises a valid point: why are these people rioting? He suggests that the pictures explain it all: because, dude, it would be totes sweet to have a Facebook picture of you throwing fake gang signs in front of a burning car! Thanks to ubiquitous cameras, every event is instantly mediated; even riots are now performative displays, a chance to grasp at an authenticity and prove that you were right there man, SRSLY, no fakin’. Personally I’ve never been a big fan of the riot as political tool (though I understand the arguments in favour of it), and I think that this sort of thing is going to make violent protest look increasingly facile to the passive masses in Western nations; it’s gonna take more clever things to catch anything more than their kneejerk disgust.

That said, I think it’s reasonable to suggest that if you can get a mob scene like this over sports results in Canada, we’ve got a good metric for how generally tense and willing to leap across the line folk are feeling right now. As I said last night on Twitter (in my best Eeyore voice, naturally), if you think that’s bad, just wait until the Arab Spring starts turning into the Arab Autumn, or for the next raft of bad harvests in Africa. Food and water riots are going to happen, and they’re going to make Vancouver look like a fucking picnic in the park.

Interesting sidebars, though: some local citizens attempted to face down the mob and organise a clean-up the next day, [via MeFi], while Vancouver PD are crowdsourcing the tricky task of identifying the rioters [via SlashDot]. Funny how people act on “civic pride” in such different ways, isn’t it?