[Editor’s note: I’m back from a long weekend away learning about literature. Poking around in the Futurismic dashboard as I get back up to speed, I noticed this piece had somehow been saved as a draft about three weeks back and not published, so I might as well roll it out of the door now, despite it being a bit late in making the point it was meant to make. If nothing else, it should irk the people waggling their fingers at me for switching browsers from the borked Kubuntu flavour of Firefox to Google Chrome. *cue Bill Hicks sucking-Satan’s-cock noise*]

Just so I can make it clear that I’m an equal-opportunities snarker rather than a Googlebooster, you know? Right; regular readers will know I’m not exactly an Apple fanperson, but I’m no happier seeing Luddite fearmongering dressed up as Concern Journalism attacking their stuff for stupid reasons than I am anyone else’s…

If you’ve ever worked in an office with wireless intranet, you’ll already be familiar with how this works as it’s practically identical, only on a global scale. But instead of your boss periodically lording over your desktop as you avoid work, countless invisible spiders will be crawling across your data while you sleep. And that’s where the iCloud becomes profoundly disturbing for anyone peering into the walled garden from a virus-infested byway.

Gah! Spiders! Everyone hates spiders, right? Especially at night-time! When it’s dark! (Also – virus-infested byway? Aren’t you supposed to be painting the outside of the walled garden as safer than the inside, here? Or are you just generally terrified of The Series Of Tubes?)

One may interpret this new, free service as manna from the tech gods. Or perhaps just as Apple keeping up-to-date now that cloud computing has captured the public imagination. But there’s something far more sinister at work.

By dismissing the importance of the personal computer and inviting its customers to let it hold on to their data “for free”, we are getting a sneak peak at how it intends to engineer what Tim Wu calls “the master switch”. Wu argues that as per previous cycles of communication consolidation, the internet will eventually be controlled by a small group of corporate monopolies. The “switch” is the ability to control competition, which comes from controlling the nature of the system.

OK, so Wu’s switch is a genuine matter for concern, I’ll grant you, and Apple are closer to having an integrated hardware+software environment for their client base than anyone else I can think of. This is a potentially interesting angle; where’s Haddow gooing to take it next?

We’ve known for a while now that Apple favours a closed system. Of course no one will be forced to join the cloud, just as no one is “forced” to watch television or use a phone. But if and when enough people do, it will become the status quo, and Apple might be able to exert pressure on any delinquent customers. The pressure will come from the offerings of media producers and application developers, who will find it much easier to make a profit once Apple’s copyright-friendly version of the internet is routed through a system that is never not connected to the North Carolina mothership.

Ugh. Nope, no one is “forced” (nice scare quotes, sir, nice scare quotes) to watch TV or use the phone… or brush their teeth, wear supportive footwear or waterproof coats, live in well-insulated houses. The downsides of all these technologies are balanced by end-user benefits, which may give us some sort of insight into why they caught on, y’know? To be clear, I’m really not keen on walled garden ecosystems, but that’s because they restrict consumer options; as such, to wring my hands over the existence of walled garden ecosystems would be an act of hypocrisy, because the consumer choice to limit one’s consumer choice in the name of convenience is still a consumer choice. By all means, attack the tangible downsides of walled gardens… but skip it with the nebulous Luddite straw men, why don’t you?

The ability to exert influence over the nature of the online experience is the missing piece to Apple’s blueprint for domination.

And it will all be expertly marketed, just as Apple has marketed its hardware – by providing a user experience that is more elegant and comfortable than that of its competitors. But once Apple has its market locked in, there will be unexpected consequences. As we’ve seen in the case of Amazon and WikiLeaks, the politics of cloud computing can become insolvent rather quickly.

Amazon yanked the Wikileaks data because of state pressure; and yes, I expect Apple would have done the same in the same position. So do we pillory corporations for doing as their governments tell them (while we obey in exactly the same sheep-like fashion), or do we pillory the government for leaning on the corporations to do their bidding in spheres where their control is otherwise limited? As people have already pointed out in previous threads, government policy often favours corporations more than it does citizens, and this sort of response is a corollary of that; sending one hired thug packing will cure the symptoms in the short term, but the disease reigns unchecked.

In the wake of the recent attacks on supposedly secure corporations that have been proven to be defenceless, the stakes for online security have been raised. And while Apple will be working to create what can only become the holy grail of hackerdom, the increased volatility of networks is a key factor as to why its vision of a uniform interface has become so appealing.

“The intertubes are full of danger! Apple are trying to ameliorate that danger! Foolish futility – the safer you make it, the more appealing cracking that nut will become!” If this is an argument against attempts to innovate new and more secure ways of using network technology, then its logical extension says we should just abandon network technology altogether, because no matter how hard we work to keep ahead of the hackers, they’ll always keep trying. The latter is very true (Everything Can And Will Be Hacked, as I reiterate here frequently), but if you can’t stand the bathwater you’d best avoid having the baby, hadn’t you?

Alternatively: “People have their houses burgled! LockmakerCo sells locks they claim will make your house less likely to be burgled! But this will only encourage lockpickers to raise their game! O NOES!” Technology is an arms race against entropy and exploits; always has been, always will be. Buy a good lock, and accept that a determined burglar will crack it if they really want to; this, I believe, is probably why insurance was invented. Life comes with risk; you can either suck it up and take responsibility for yourself and your choices, or you can outsource that burden of care to the government and then complain in surprised tones when they fail to protect you from your own stupidity and/or shortsightedness.

Mitigate your own risks. Use the cloud (Apple’s or anyone else’s) and a external hard drive for double security; don’t store data you wouldn’t want anyone else looking at in an unencrypted format on any machine that you can’t control. This is basic Green Cross Code shit, people. Don’t blame the sellers of convenience for exploiting your laziness; only you can empower them to screw up on your behalf.

In one of those wonderful moments of RSS serendipity, this little gem was right next to the lament dissected above. 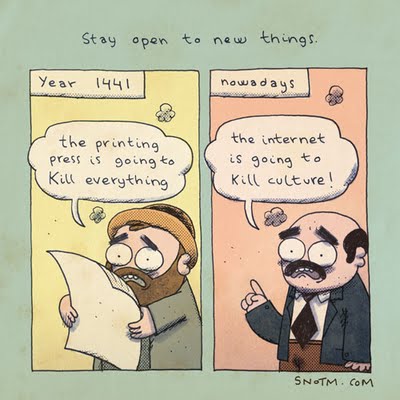