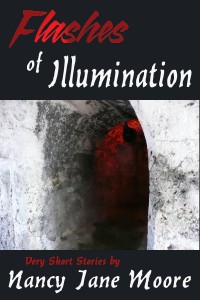 I like to do what I can to support the writers we’ve published here at Futurismic, so when Nancy Jane Moore asked me if I’d post a super-short story of hers to promote her ebook anthology of flash fiction, Flashes Of Illumination, how could I refuse?

You can pick up a copy of Flashes of Illumination from Book View Cafe in in mobi (Kindle), epub, prc, and pdf formats for just two point nine nine of your Yanqui dollah, or whatever your local currency equivalent might be at time of purchase. So pop over there and make a purchase, should you find this piece leaves you… er, hungry for more. (Or should that be hungry for Moore?)

The Dog at the End of the World

Sounds very ordinary, but context is everything.

Where we live it hasn’t rained in five years, seven months, and twenty-three days. Nothing grows. There’s no topsoil to put a plant in. Plenty of dirt, but it’s all blowing through the air.

In this context, I have a dog means there’s something for dinner.

Not that I really have a dog. We ate all the dogs a long time ago.

I used to have a cat. Cats outlasted the dogs. They are worse eating – too stringy. (Predators in general aren’t tasty food sources.) And the cats earned their keep by keeping mice out of the grain stores. For awhile. Until we decided that mice were too nutritious to waste on cats.

Of course I don’t have a dog. I was just making a point.

Frankly, we’ve gone beyond dogs and cats and mice. There’s been more than one report of cannibalism, and I’d be willing to bet that for every incident we’ve heard about, there are ten no one mentions. So far we hear the person eaten died of natural causes. People said they just couldn’t face sticking all that meat into a hole in the ground.

But if nobody’s been murdered for dinner yet, it’s only a matter of time.

I said I don’t really have a dog. Where would I even get a dog these days?

The charity food used to come every week. Last year it dropped to twice a month, and at the beginning of this year they told us the shipments would only come monthly. We get the same amount of food we always did: a pound of rice, a pound of beans, a pound of wheat.

Everybody has scurvy and no baby has lived more than three months in a year and a half.

It’s a Chihuahua, for God’s sake. Skin and bones. Not enough meat on him to do anybody any good.

The local well dried up, so now we have to walk five miles just to get some water. We only get three gallons each a week. No one bothers using it to bathe. Drinking’s more important.

It’s hot, too. The sun was always relentless here, but now we can’t even sit under a tree.

The neighbors took my dog. I heard him cry out when they killed him. I cried for the first time in months.

I ate a piece.

The charity food hasn’t come in seven weeks. Some say there’s some new disaster, that it’s no longer fashionable to care about us. Others say even the rich are starving these days, that the whole world is in trouble.

Ten days ago a neighbor died. We didn’t even talk about it. We each contributed bits of wood from our houses for the barbeque fire.

I pretended that it was just another form of cremation. But I ate a little. Stringy, like the cats.

I haven’t eaten anything in three days. Yesterday I started off to get water, but passed out on the road. When I came to, I crawled back home. Nobody helped me.

Everybody’s watching me now. There’s only so long a person can go without water. A couple of people have snuck by, brought me a cup to sip. I appreciate it, even though I know they’re just doing it so they’ll feel less guilty when it comes time to feast on my remains.

2 thoughts on “Flash fiction: The Dog at the End of the World by Nancy Jane Moore”