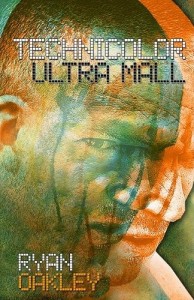 Budgie is a Vidicon, a member of one of the countless drug-fuelled gangs who fight to the death for territory and prestige in the red levels of the T-Dot ultramall. He sends the last of the Dog Goblins northwards in a gory streetfight, but not before his enemy dispatches his patrol partner Sputnik with a poisoned blade to the jaw. The glory of the kill accrues to Budgie, and Vidicons are no strangers to murder and its consequences, but emotion, sentiment or friendship aren’t covered by the rulebook; there’s no profit in regret or compassion. Gang stuff is just business.

Or so it’s supposed to go, anyway. But after hauling his partner’s dying body to a performance surgeon who fails to save him, Budgie has to face the consequences of the Vidicon lifestyle in something other than the abstract, starting a long painful chain of questions whose answers don’t get any easier to stomach. Meanwhile, the alpha and beta males of the Vidicon hierarchy have their fingers in more rarified pies, like running red-level raves that cater to the slummers who come down from the green levels for a forbidden taste of danger and dirty hedonism. Gammas like Budgie are just disposable tools in their projects, and even as Budgie starts trying to go straight and find a way out of the red levels, he gets entangled in machinations that will not only destroy everything he cares about, but the mall itself.

The consumerist mall-as-dystopia is not a wholly original idea, but I can’t remember ever encountering one so unflinchingly brutal as Technicolor Ultra Mall. From the opening blaze of profanity-peppered violence to the bleak cataclysm of its conclusion, Oakley never eases the pressure, tearing aside the glossy veils of commerce to reveal the cynical profiteering beneath. This book is yet another data point for the adage about science fiction novels being about the time in which they are written more than the time in which they are set, and as the global economy goes from bad to worse it’s only going to look more timely. We already live in Oakley’s mall, sealed off from the over-polluted outside world like the arcologies of the classic satirical RPG Paranoia, everything we see or hear or feel mediated by businesses interests, our politics a polarised red vs. blue puppet show that distracts us from the real game being played by the high rollers, our lingering primate instincts and tribal urges leveraged in order to maintain and prop up a profitable hierarchy.

Technicolor Ultra Mall is primarily about class. The metaphor is as unmissable as it is overamplified for effect: the underground red levels where the gangs roam free along streets full of bars, bordellos and shooting galleries (both kinds), and a crude code of honour is brutally enforced; the middle class green levels, where the warfare is more subtle and your good standing as a (seemingly) upright citizen is equivalent to the rep of a red level gangster; the rarified blue levels, which – fittingly, and true to life – we see very little of at first hand, and whose machinations manifest as turbulence in the layers below, like the vortices caused by a dragnet sweeping through a fishtank. But while class may be the bedrock theme, there’s plenty of other stuff salted away in the plot: radical transhuman technologies (for those who can afford to pay, natch) and their potentially dehumanising side-effects; the psychology of sales and persuasion, and the engineering of consent; satirical critiques of constructed and performative gender and class roles, and of psychiatry-as-character. A selection of vignette stories that feed into to the main narrative make a point of showing how easily manipulated all of us are, even those of us who think ourselves immune to the crude importunings of marketeers; Oakley has evidently studied the art of persuasion very closely, and it’s perhaps Technicolor Ultra Mall‘s greatest triumph that he manages to convincingly portray its insidious power while making it transparent enough that we can see the psychologist/wizard behind the curtain. As a debt-defaulting gambler discovers to his peril, the casino always wins; our statistical illiteracy and blindness to zero-sum games makes marks of us all.

While Budgie’s tragic Orpheus-esque arc is complete, there are a few dropped threads and unexplored alleyways; a late introduction of the possibility of transferring minds between bodies (a fine opportunity to extend the critique of both radical transhumanism and class, of the body as commodity) goes underdeveloped, for example. Some of the anarchist rhetoric comes across as a little crude, but that’s to be expected given the naïvete of the characters giving voice to it; likewise, the underlying metaphor comes on heavy-handed on more than a few occasions, and reading them is like being kicked around a gravel car park by a guy with a point to prove. Technicolor Ultra Mall is inescapably radical in its political outlook, and that alone will put off a certain section of the traditional science fiction market, even as it aligns Oakley along the same refusenik axis as sf authors as diverse as Ballard, Doctorow, Sterling and Dick. There will doubtless be accusations of hypocrisy – how can you critique extreme media sensationalism by using extraordinarily graphic violence? – but there is no glorification here. Quite to the contrary; the violence always serves to illustrate the moral bankruptcy or desperation of its perpetrators, and anyone who can read it as glorious is probably beyond help.

While reading Oakley’s savage prose is like riding the fight-or-flight limbic buzz of an amphetamine high, fans of redemption or happy endings should walk away now and never look back, because Technicolor Ultra Mall will break your bitter heart before hawking it to a black-market organ recycler. But as you do so, consider that your flinching from the cruelty of consumerism’s consequences is exactly what enables them to exist. We all know the mall is cruel, but we all know that it’s easier to play our roles than question the script. Oakley knows how the script ends, but so does anyone else who’s willing to think about it; trouble is, that knowledge comes freighted with an eschatological sense of futility. Technicolor Ultra Mall is a funhouse mirror, and the joke is that we all want to believe that the leering face that looks back at us is anyone else’s but our own. It’s also a rugged and angry début novel from a writer who isn’t afraid to turn the spotlight onto complicity – his own, and everyone else’s. To paraphrase one Michael Franti, “hypocrisy is our greatest luxury”; Oakley dangles the possibility of redemption, or at least individual escape from the system, only to snatch it away at the last.

The comparison isn’t exact, but Technicolor Ultra Mall belongs to the same dystopian school as 1984; Oakley may not yet have that Orwellian mastery of prose, but he has the required acuity of vision, and – most importantly of all – the willpower not to look away as a designer-label bought-on-credit boot stamps on a human face, forever.

[ In the interests of full disclosure: Ryan Oakley is an online buddy, courtesy an introduction from M1k3y of grinding.be, who said something along the lines of “you should really be following this guy, he’s sharp as hell”. It’s a fair description; Oakley’s as keen-eyed, angry and iconoclastic as his novel, and quite possibly the most distinctively-dressed anarchist one could ever hope to meet. ]