Via SF Signal, here are the winners of this year’s Hugo Awards:

Very few surprises there, I think it’s safe to say. Ted Chiang’s victory was a given long before the nominations were announced, for example; Van Gelder is a shoo-in based on subscriber figures alone, and likewise Scalzi.

The only vague surprise is Chabon taking the Best Novel – not because it’s an undeserving book, as I’m assured it’s excellent, but because its definition as sf has been such a controversial issue elsewhere.

How would you rewrite this list if you had control of sf fandom for the day?

Wednesday 30th April sees the presentation ceremony for this year’s Arthur C Clarke Award for the best science fiction novel published in 2007. Never short on controversy, this year’s shortlist has generated plenty of discussion and debate – no less for the novels that are missing from it than for those that are present.

It’s Futurismic‘s great privilege to feature this round-up review of the Clarke Award shortlist by noted science fiction novelist, critic and academic Adam Roberts. So settle down with a good big cup of coffee, let Professor Roberts walk you through the shortlist … and then place your bets on the winner in the comments!

There’s been a deal of pother about this year’s Clarke shortlist, more even than this often-controversial event usually generates. Surprise at the omission of a number of highly regarded titles – we might mention, say, McDonald’s Brasyl and Chabon’s Yiddish Policemen’s Union – fuelled bloggish mutterings about hidden agendas, panderings to Evil Mainstream Lit and a desire to generate Turner Award-style notoriety rather than simply to choose last year’s best SF novel.

The muttering boiled down to a sense that the Clarke judges were liable to corrupt the nation’s youth and ought all to drink hemlock without ado. The question, though. is a simple one: do these six titles constitute a list of the best sf novels published in the UK last year? END_OF_DOCUMENT_TOKEN_TO_BE_REPLACED 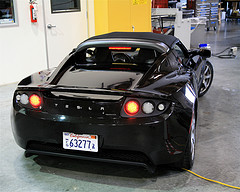 Glen Hiemstra of Futurist.com has a video on his home page called ‘Outlook 2008′ in which he discusses his five big stories for the coming year, plus a wild card. He talks about oil prices, the economy and the political changes (or non changes with the presidential elections so close to the end of the year) of 2008. Two more technological comments caught my eye.

He mentioned both Solar and Nano technologies as big movers in the coming year. In particular he highlighted NanoSolar, whose thin-film solar cells have just started reaching commercial grade at potentially cheaper prices than coal. The other company on his watch list was Altairnano, which uses ceramic nanomaterials to create long-living batteries that should see the market in a number of forms in 2008, including in electric cars such as the pictured Tesla Roadster.

His most interesting comment was in the ‘population’ section, talking about young entrepreneurs:

“The leading edge of the digital native generation is now 18-25 or so. The first generation to grow up in the personal computing and internet age is now at work. The venture capital world increasingly focuses on this generation, the very young creatives, for the breakthrough ideas. Thus 2008 marks a change-over to the next generation for innovation leadership.”

It will be interesting to see if these predictions come true. Other turn of the year predictions include a pessimistic James Kunstler and an optimistic 50-year prediction by Climate Progress.

[via Futurist.com, image by Jurvetson]