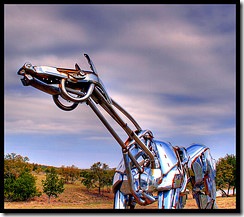 Jamais Cascio is a sensitive soul; he doesn’t like seeing beasts of burden being abused and pushed around. Even robotic ones:

“My reaction to seeing this robot kicked paralleled what I would have had if I’d seen a video of a pack mule or a real big dog being kicked like that, and (from anecdotal conversations) I know I’m not the only one with that kind of immediate response. True, it wasn’t nearly as strong a shocked feeling for me as it would have been with a real animal, but it was definitely of the same character. It simply felt wrong.”

This throws an interesting light on the “robot rights” debates that keep surfacing. While I think we can all agree that a non-sentient machine doesn’t require the vote or union-mandated coffee breaks, this sort of psychological reaction to machines with a visual semblance of life may cause problems in early-adopter workplaces. [image by TwoBlueDay]

After all, even battle-hardened US Army colonels have been known to balk at sending machines to their doom.