The Moody Blues‘ 1969 album To Our Childrens’ Childrens’ Children employs the full tidal panoply of 1960s hippy musical effects (guitars, full orchestra, a forty-strong choir going ‘ahh! ahh! ahh! ahh!’ in the background, the sounds of rockets launching and various galactic boingings, plus lyrics spoken ponderously rather than sung) to celebrate the Apollo 11 moon landing. And what a tremendous achievement for humanity it was. The moon landing, I mean. Not the Moody Blues’ album. The Moody Blues’ album is really very bad, a walnut-whirling, quintuple-choc, bathful-of-treacle, gag-reflex confection that embodies all the most sicky-sicky aspects of 1960s music. The opposite of an achievement. A zchievement, perhaps. 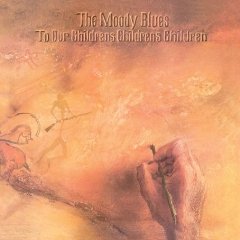 This is an album that takes the listener, via the Apollo programme, on a tour of the future solar system up to the year 1,000,000. The main themes are love, peace, children, innocence, children, our children, hope and our children. It’s as if the various members of the band were in competition with one another to put in as many heartfelt references as possible to ‘the eyes of a child’ and ‘the innocence of our children’, to ‘the web of love and peace’ and to ‘the eyes of a child’ again. Track 2 is called “The Eyes of a Child”. So is track 4. Actually track 4 is called “The Eyes of a Child part 2” but it amounts to the same thing. Now, don’t misunderstand me. I’m a father. I consider my children’s eyes to be perfectly lovely, thank you very much. It’s just that I don’t think it likely that either the beauty of my child’s eyes or the cause of world peace will be materially improved by wibbly hippy meanderings of the calibre of, say, the chorus to track 10 “Candle of Life”:

Two things are going to strike the listener as he or she wades through the goo that is To Our Childrens’ Childrens’ Children. One, inevitably, concerns the name of the band itself. The Moody Blues. The Moody Blues? At some point one of the founding members must have been listening to Blind Lemon Jefferson or Robert Johnson or some other great Blues musician singing about their dirt-poverty, the misery and hopelessness of their existence, about selling their souls to the devil or being crossed-in-love and shooting down their rivals-and they must have thought to themselves: ‘blimey! he’s a bit moody.’

One word to that: no.

The second thing that strikes the listener is the frankly odd mathematical principle at work throughout the album. Track 12 is called “I Never Thought I’d Live To Be A Million”. This is Our Childrens’ Childrens’ Children we’re talking about. Three generations, or an average life expectancy of over three hundred thousand years each. Is it that people in the future will live so long, or only that it will seem to be so long, because they’ll be listening to tar like this?

Then there’s the album’s first track, “Higher and Higher”, which begins with the sound of a Saturn V Launch. Then drummer Graeme Edge intones:

Blasting, billowing, bursting forth with the
Power of ten billion butterfly sneezes,
Man with his flaming pyre has conquered the wayward breezes.

Now every schoolchild knows that, breathing as they do through spiracles (those tiny holes in their flanks), butterflies don’t actually sneeze. But putting that on one side for a moment.

At launch a Saturn V rocket puts out about 35 million newtons of thrust. Dividing by ten billion gives us 0.0035 newtons per butterfly sneeze. This is the power to accelerate about a third of a gram (a paperclip, say) one metre per second squared, which I consider impressive sneezing power. You could probably flick a paperclip with your finger such that it accelerates at one metre per second squared. But you are much bigger than a butterfly. Butterflies vary in weight from 0.0003 to 3 grams. Even if we take a median figure the song is suggesting that a butterfly can accelerate something weighing, let’s say, a tenth of its own bodyweight simply by contracting its spiracles. Scaling up, this would be equivalent to a grown man sneezing so hard than an artificial leg flew off the table in front of him with the velocity of a greyhound out of the starting gate. Which, now that I come to think of it, is a suitable image with which to round-up this account of the Moody Blues 1969 SF album To Our Childrens’ Childrens’ Children.