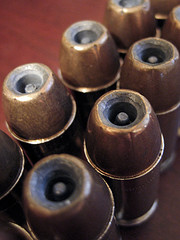 Researchers over here in the UK are working on a way to make it easier to identify criminals using guns. Their solution? Using pollen and tiny granules of crystal, you attach a unique “nano-tag” to every cartridge – sort of like a bio-chemical barcode.

The nanotags are made from pollen, and a mix of grains of crystal oxides such as zirconia, silica and titanium oxide. Using varying combinations of crystal and pollen grains, it is possible to make large numbers of unique tags.

“We decided to work with pollens because they have a unique structure, resistant to temperature and easily recognisable,” said Paul Sermon from the University of Surrey, who has led the research. “It’s also easily dispersed and carried around in clothes, skin, etc.”

But what if the criminal in question has obtained the rounds by criminal means, leaving no record to tie them to the bullets?

In addition to the tags, the researchers are working on a way to have gun cartridges retain skin cells from anyone that handle them, for later DNA-based forensic analysis. Micro-scale grit can effectively trap cells and protect DNA from the heat of firing. Today, cartridges are smooth and rarely retain DNA or fingerprints.

Well, OK. It’s very near-future sf-nal, but there’s still one glaringly obvious major flaw with this idea – it only has a chance of catching people who buy (or steal) their cartridges from new and legitimate stock, and who leave the spent shells for the police to find.

If there’s already a black economy where guns can be converted, hacked and (in some cases) built from scratch, I can’t see them struggling to adapt to reloading old cartridges. My father used to do that with shotgun rounds back in the eighties, and it’s a simple enough procedure that even a kid in their teens could pick it up.

So all a wide implementation of this idea would actually achieve would be to drive ammunition manufacture underground, adding a new (and lucrative) industry to the black economy. Because, y’know, the black economy just isn’t busy and powerful enough already. The problem with technology: when you’ve got a hammer, everything looks like a nail. [image by mx5tx]