We have three dogs: a golden retriever and two border collies. The border collies are wicked smart. I’m pretty sure that across some narrow bands they are smarter than we are. For example, they can manipulate us into behaving the way they want pretty effectively – they’re herding dogs, after all. Sometimes they’ll get us all gathered together before we even realize it. Other times we know, but they still manipulate us into doing what they want. They have to vary their techniques regularly to keep succeeding. I am a hundred percent confident that smarts, feelings, and sometimes a big chunk of creativity goes into their behaviors. END_OF_DOCUMENT_TOKEN_TO_BE_REPLACED

The issue of basic rights for the higher animals pops up with a certain regularity, especially in transhumanist circles; here’s George Dvorsky responding to some of the more usual objections:

The rights I’m talking about have to do with protections. Nonhuman animals, like humans, should be immune from undue confinement, abuse, experimentation, illicit trafficking, and the threat of unnatural death. And I’m inclined to leave it at that for now.

While these animals may not be as intelligent or knowledgeable as humans, their cognitive and emotional capacities are sophisticated enough to warrant special consideration. These are self-aware and self-reflexive animals. They are cognizant of other minds, exhibit deep emotional responses, and have profound social attachments. That’s not to be taken lightly.

At the same time I acknowledge that there there has to be a realism applied to this issue. Nonhuman animals who qualify as persons cannot participate in society to the same degree that humans can. Thus, they should be considered and treated in the same manner that we do children and the developmentally disabled—which is that they still have rights! We would never experiment upon a 3-year old human child, nor would we force a mentally disabled person to perform in a circus. We believe this because we recognize that these individuals are endowed with (or have the potential for) the sufficient capacities required for personhood. Consequently, we protect them with laws.

For what it’s worth, I’m in agreement with Dvorsky on most of his points here, though I think the biggest roadblock to non-human rights is our incomplete provision of human rights. Until we live in a world where we genuinely treat all human beings – regardless of race, gender, physical or mental ability, attractiveness, intelligence or lack of privilege – as our equals (biological, economic and political), how can we ever hope to extend that parity to creatures whose existence we definitively can’t empathise with on the basis of experience? (Indeed, some of the more extreme animal rights advocates seem far more able to empathise with the suffering of animals than the emotions of their fellow humans, and as such have done their cause far more harm than good.)

I totally agree that we should be looking to protect non-human sentients from exploitation, but attempting to do so before we’ve flattened the human playing field is to put the cart before the horse and then wonder that the cart doesn’t respond to the whip. Look to the plank in one’s own eye, and all that.

You probably know the classic three answers to that one: humans are unique among animals because of tool use, symbolic behavious (e.g. language), and the domestication of other living things. Now, however, we may be able to add a fourth… although it might be better understood as the one that underlies and informs the other three, namely our long history of learning about and understanding the behaviour of other animals. Take it away, Ars Technica:

Shipman asserts that humans’ invention and use of stone tools about 2.6 million years ago helped them successfully hunt and quickly dispatch large carcasses, allowing them to become major players in the predatory guild. As a result, humans became much more in tune with animals for two reasons: the better they understood their prey, the more efficient hunters they would be, and the better they could evade and outcompete other carnivores. Thus, the animal connection began; because it enhanced survival, learning about animals’ anatomy and behavior became a very advantageous pursuit.

The animal connection is strongly evident in another trait that is considered unique to humans: symbolic behavior, specifically art. Animals were the main subject of prehistoric art. Incredibly specific details can be recognized from early cave drawings, including animals’ colors, particular behaviors, and dimorphism between the sexes.

Finally, Shipman claims that by domesticating animals, humans used them as “living tools.” Evidence shows that dogs were the first animals to be domesticated, suggesting that the first domesticates were not used as food sources. In early societies, animals served many purposes, such as carrying heavy loads, providing raw materials such as wool, producing fertilizer, protecting people, hunting game, and transporting goods. By using their accumulated knowledge and understanding of animals, humans were able to transform other species into “living tools” that enhanced their own fitness.

It might help curb your concerns about terrorist attacks channeled through nature to learn that some of God’s creatures are fighting on the side of righteousness: the US Navy has a Marine Mammals unit that trains sea lions and dolphins to detect and apprehend terrorists trying to sabotage or disrupt coastal infrastructure [via SlashDot].

Apparently the unit has existed since the Vietnam War… how in hell did they not get their own TV show? 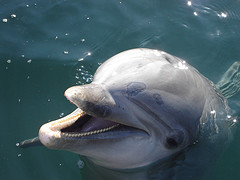