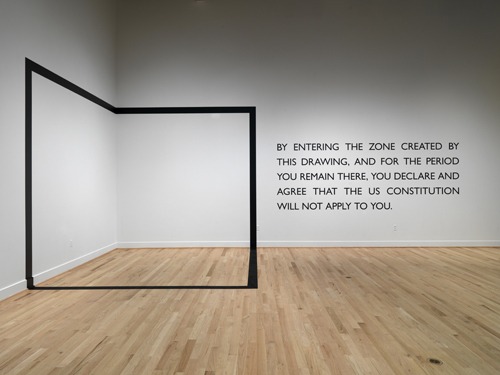 Carey Young, via This Isn’t Happiness. Offered without comment.

Does what it says on the tin… and does it gloriously, too. What a super piece of work! Can’t tell you much about it beyond that it’s signed by someone called Ward Shelley (if I’ve read the handwriting correctly)*, and that I saw it via the tweetings of Adam Rothstein and Justin Pickard. Click through for the huge original version, and prepare to lose twenty minutes of your day in sheer wonder. 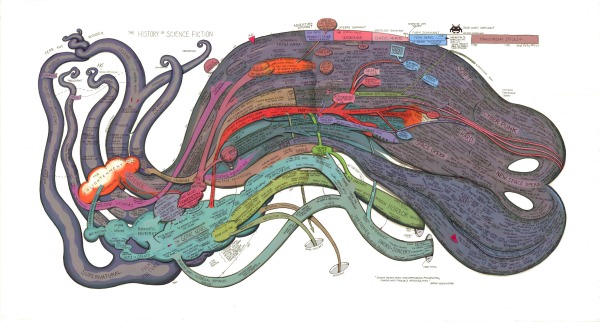 [ * Addendum: it’s an entry to the seventh iteration of the Places & Spaces: Mapping Science contest, which looks like it contains all sorts of other interesting stuff. ]

Old Duchamp would be proud, I like to think… though given the responses of other postmodern artists to similar events, I’m probably being overoptimistic on that point. Nonetheless, the future shows no sign of waiting for us to reach an accommodation with it, and you can now get yourself a fabbed facsimile of Marcel’s iconic “readymade” urinal museum piece [via BoingBoing]. 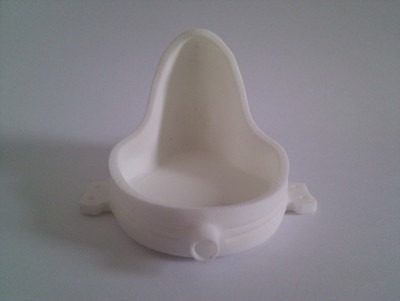 As mentioned before, copyright on physical objects is a lost cause, though I doubt that’s going to stop a phalanx of windmill-tilting IP knights charging into battle as the terrain churns like liquid beneath the hooves of their horses, and the lawyers slip in to their vulture costumes off-stage.

And hey, 3D printers are getting pretty close to the point where they can print copies of themselves, too… so at least the futile carnage should be short lived.

Via kottke, here’s a very interesting interview with Francis Ford Coppola, which has some points worthy of consideration by musicians and writers and other artists worried about the internet killing off their chances of success:

Is it important to veer away from the masters to develop one’s own style?

I once found a little excerpt from Balzac. He speaks about a young writer who stole some of his prose. The thing that almost made me weep,  he said, “I was so happy when this young person took from me.” Because that’s what we want. We want you to take from us. We want you, at first, to steal from us, because you can’t steal. You will take what we give you and you will put it in your own voice and that’s how you will find your voice.

And that’s how you begin. And then one day someone will steal from you. And Balzac said that in his book: It makes me so happy because it makes me immortal because I know that 200 years from now there will be people doing things that somehow I am part of. So the answer to your question is: Don’t worry about whether it’s appropriate to borrow or to take or do something like someone you admire because that’s only the first step and you have to take the first step.

How does an aspiring artist bridge the gap between distribution and commerce?

We have to be very clever about those things. You have to remember that it’s only a few hundred years, if that much, that artists are working with money. Artists never got money. Artists had a patron, either the leader of the state or the duke of Weimar or somewhere, or the church, the pope. Or they had another job. I have another job. I make films. No one tells me what to do. But I make the money in the wine industry. You work another job and get up at five in the morning and write your script.

This idea of Metallica or some rock n’ roll singer being rich, that’s not necessarily going to happen anymore. Because, as we enter into a new age, maybe art will be free. Maybe the students are right. They should be able to download music and movies. I’m going to be shot for saying this. But who said art has to cost money? And therefore, who says artists have to make money?

In the old days, 200 years ago, if you were a composer, the only way you could make money was to travel with the orchestra and be the conductor, because then you’d be paid as a musician. There was no recording. There were no record royalties. So I would say, “Try to disconnect the idea of cinema with the idea of making a living and money.” Because there are ways around it.

Of course, Coppola is wide open to the standard Doctorow Rejoinders here: “that’s easy for him to say, he’s got a steady income from doing [x] on the side!”; “he’s already got a market thanks to his own fame in other areas!”; “he had lucky breaks that I’ve never got a chance of getting!”… all of which are elaborate ways of avoiding saying “I don’t want to have to work for years on my art with no guarantee of getting rich from it!” Best stop now then, eh? It’ll save you a lot of anguish, and you’ll open the field up for those who’re willing to fight on regardless.

Maybe musicians, writers and movie-makers will have to accept poverty – or at least a low income and/or a supplementary day-job – as the sacrifice they make for the chance to create their dreams; as Coppola (and many others) have pointed out, that’s actually the historical norm rather than a fall from a god-given state of grace. And maybe that will mean there’s less shallow cookie-cutter crap clogging the art marketplaces. Sounds like a net win to me.

Looks like one of genre fiction’s more perennial debates is about to resurface, so why not stir the pot a little bit? Damien Walter takes the podium at The Guardian to ponder the question of  cover art:

… there is no denying that genre fiction also has its share of fashion victims. The tedious parade of tattooed, faceless young women gracing thousands of paranormal romance novels is a fashion that can only be improved by ending. And the original US cover for the 12th volume of The Wheel of Time saga actually seems to be issuing a challenge to the reader, via its stumpy-armed hero, daring us to test if the quality of the prose matches the illustration. But American independent publisher Baen Books have raised bad genre covers to an art in itself, producing covers so shamelessly packed with SF clichés and militaristic jingoism that it is hard to believe they are not some ironic spoof.

To some extent, I think there’s a subcultural effect at work here: with Baen’s covers, for instance, I expect the very cliches that ensure I avoid Baen titles as if they were megaphone-toting high-street evangelists are the visual aspects that make them appeal to their (undeniably large and consistent) audience: the packaging matches the product, in other words. But fashions and trends sweep with increasing rapidity across the covers of genre in general, and experience dictates that sometimes the best books have the worst covers of all – a feeling sometimes shared by their writers, as was the case with Peter Watts’ Blindsight. (Watts actually went so far as to make an alternative jacket available.)

My suspicion, based on personal experience, is that cover art is there to hook neophyte genre readers rather than us old veterans. I ate my way through countless Dragonlance and Forgotten Realms RPG tie-ins in my early teens, and the covers spoke bluntly and efficiently of what I’d find withing their pages. By the time I was old enough to be slightly embarrassed by the cheese factor of the covers, I was already an addict… and already valued the product far more than the packaging.

So as to avoid tarring everything with the same brush, there are some genuinely wonderful and seductive examples of cover art out there, though they seem to come predominantly from the better small presses (ChiZine Publications’ covers totally blew me away at a room party at last year’s EasterCon, for instance) and the titles that are deliberately being aimed further afield (China Mieville’s literary urban fantasy romp Kraken, for example, or Charlie Stross’ the-future-is-now nerd-lit novel Halting State). But I find that personal recommendations and author/publisher reputation is far more likely to sell me a book than its cover… indeed, sometimes they manage it in spite of the cover!

Perhaps the rise of ebooks (and the associated need to have a cover that looks good as a thumbnail on a virtual shelf) will change the landscape; indeed, as book-buying becomes more “social” (in the web2.0 sense of the term), perhaps the book cover’s role in enticing purchasers will fade. In the meantime, there’s plenty of yucks to be had at Good Show Sir!, a blog that unearths and photographs some of the more egregious examples of genre cover-art cliche for the amusement (or bemusement) of all. (At the risk of seeming to pick on an easy target, the posts tagged “Baen Books” are a great place to start…)

Got a favourite book jacket that sold the book to you fair and square? Got a shining example of cheddary cliche that sums up every stereotype of genre fiction held by non-readers, or of a brilliant book in a dreadful disguise? Link ’em up in the comments!