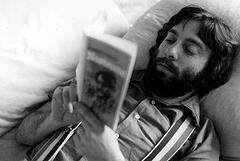 The ever-ubiquitous Cory Doctorow crops up over at Internet Evolution, talking about “media-morphosis” – the ways in which the internet is mangling and mutating all the other forms of media. The whole thing is worth a read, but I thought I’d pick out a bit of Doctorow’s thinking about the future of the novel, as it fits quite neatly with some of the recent ebook posts here at Futurismic. [image by John Althouse Cohen]

Doctorow points out that books are suffering on two sides – firstly from the rise of the big-box retailers, which have restricted the titles available, and secondly from the way we’re being conditioned by the web (and other media imitating the web) to read in short, easy-to-swallow chunks – and then paints a worst-case scenario:

If big-budget movies might turn into opera, then long-form narrative books might turn into poetry. There’s a hell of a lot of published poetry — more than ever — mostly consumed by other poets and a small band of extremely dedicated followers of the form. A few poets make a big living at it, a few more make a marginal living at it, but for most poets, income is aspirational, not reality-based (this is pretty close to the situation in short fiction already, and not far off from the world of novel writing in many genres).

But a future in which novels turn into hand-crafted fetish items for a small group of literati is one in which the relevance of the novel dwindles away to a dribbly nothing.

I think most of us here would see that as a rather sad omega point for one of our favourite media, especially given the incredible artistic possibility it has to offer; Doctorow suggests that one route to salvation for the novel would be to build the sort of evangelical business that distributes books to places that they otherwise might not reach.

But what if his worst-case is actually the fact of the matter? Is it not possible that the novel will increasingly become an anachronism, the sort of thing considered historically interesting but culturally irrelevant by 21st Century humankind? Maybe we just need to face up to the idea that reading books for fun is a pastime whose days in the sun are over, no matter how personally attached to it we may be.