Sounds like something out of an Edwin Morgan* poem… but what are poems but dreams of possible truths, eh? From io9, suggestions based on Cassini probe data that Rhea, one Saturn’s many moons, might have a breathable oxygen-rich atmosphere:

It seems oxygen is far more abundant than we ever suspected, particularly on moons that seem to be completely frozen solid. We recently found evidence of oxygen on Jupiter’s moons Europa and Ganymede, and now this finding on Europa. In fact, because the region of space surrounding Saturn’s rings has an oxygen atmosphere, it’s thought even more of the icy moons within the gas giant’s magnetosphere likely have little atmospheres of their own.

According to new data from the Cassini probe, the moon’s thin atmosphere is kept up by the constant chemical decomposition of ice water on the surface of Rhea. It’s likely that Saturn’s fierce magnetosphere is continually irradiating this ice water, which is what helps to maintain the atmosphere. Researchers suspect a lot of Rhea’s oxygen isn’t actually free right now, but is instead trapped inside Rhea’s frozen oceans.

The last couple of years have seen the Rare Earth hypothesis take a number of serious body-blows, what with moons with atmospheres and oceans, and the sudden rash of exoplanet discoveries; I doubt I’m the only person here who isn’t too sad about that. 🙂

[ * Probably my favourite poet, and a trailbreaker in sf and concrete poetry right back in the Sputnik era, Edwin Morgan is already much missed. Rest in peace, sir. ]

Seeing as how SpaceX managed to pull off the first commercial rocket launch to reach orbit over the weekend, I figure we’re allowed to get a bit excited about space again… it’s a welcome distraction from the World Cup, if nothing else. It might have been even more of a distraction to our antipodean friends, some of whom spotted weird lights in the sky that may (or may not) have been parts of the Falcon 9 falling back to Earth [via SlashDot].

But who can we trust to tell us the truth of it, hmmm? After all, the Chinese have a history of telling porkies about their space program, and hell knows the Cold War space race was all about giving the people the story you wanted them to believe… it might be fun to work as a spin doctor for a multinational space company.

Speaking of the Cold War, did you know that Venera, the Russian mission to Venus, was the first to send back photographic images from another planet? If any nation-state or corporation is taking a poll on where we should send space probes next, my vote goes for Titan – it’d be fun to find out if those atmospheric anomalies are actually the signal of methane-based microbial life that they appear to be…

Astronomy is changing fast. Ten years ago, planets around other star systems were still essentially theoretical; now we’re not only capturing them on telescopes but discovering carbon dioxide in exoplanetary atmospheres. A little bit of sensawunda for your Monday morning. 😉 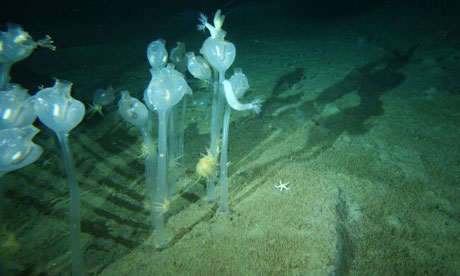 When people suggest humans should colonise space, it’s often said that first they should attempt to conquer an alien world on our own doorstep – the oceans. The deep cold and pressure of the seabed is just as much a challenge as the vacuum of space and the creatures that live there are just as strange as any in science fiction.

Take a look at some of these Tunicates, that look like glass tulips rising in stems from the seabed. A recent Antarctic expedition found many new species a mile underwater.

Martin Riddle, leader on the research ship Aurora Australis, said yesterday: “Some of the video footage is really stunning. Gigantism is very common in Antarctic waters. Many [of the animals] live in the dark and have pretty large eyes. They are strange-looking fish. In some places every inch of the sea floor is covered in life. In others we can see deep scars and gouges where icebergs scour the sea floor as they pass by.”

Whilst space has its own challenges and fascinations, there are still some parts of our world that have never before been glimpsed by human eyes.

[story and image via the guardian]

Two chaps from Columbia University have published a scheme for chemically extracting carbon dioxide from the atmosphere by passing it through a "chemical sponge". Critics of the scheme point out that the extraction process would be powered by electricity, and that we’d be better off cutting down the amount of greenhouse gas emissions we produce rather than looking for ways to recapture them. I’m no climate scientist, so I can’t pass judgement on which is the better plan … but at least there’s evidence that the prizes like Richard Branson’s Earth Challenge get people thinking about solutions to the big problems. [FuturePundit] [Image by Ju-X]